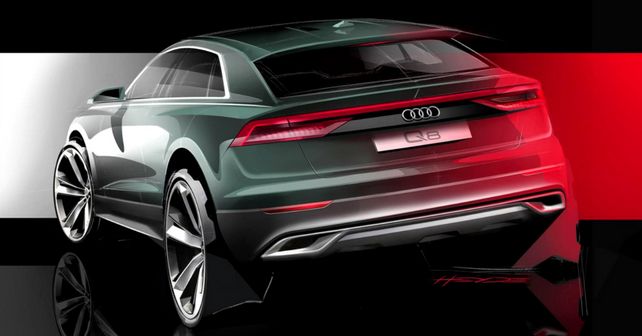 Looks like the flagship Audi SUV will take some design inspiration from Lamborghini Urus. However, it won’t cost as much, we believe...

Audi has revealed an official sketch of the upcoming Q8’s rear end on its Facebook page. The upcoming SUV flagship, which will be positioned above the current Q7, is referred to as an ‘SUV with coupe design’ by Audi.

From the sketch, the Q8’s rear looks quite inspired by the Lamborghini Urus, but is less angular. From the Q8 concept that we saw last year, it is likely that the production model will be the sleekest SUV in Audi’s Q series. The Q8 sits atop Volkswagen Group’s MLBevo platform, the same one that also underpins the Audi Q7, Bentley Bentayga, Porsche Cayenne and VW Touareg.

The Audi Q8’s official reveal is not very far away. Audi is also releasing a five-part teaser video series that will give a better look at the Q8. The first episode of the series will be out on May 21, while the last one will release on June 5 - on www.q8.audi.