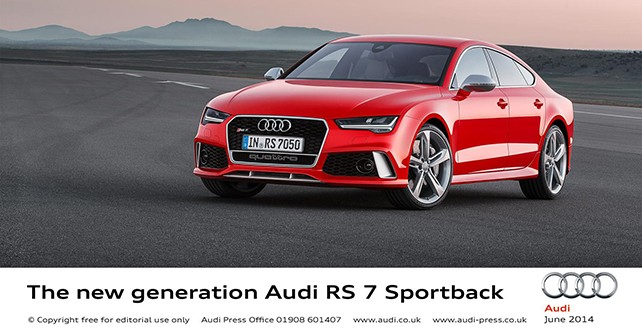 Audi recently unveiled its sloping powerhouse the 2015 RS7 Sportback.  This 5-door coupe comes across more edgy even though it has received a minor make over.

The all dominating front grille gets the signature RS black honeycomb with sharper corners making it more distinctive.  To make it stand out further one can add a personal touch by selecting one of three optional packages: matt aluminium, gloss black or carbon. The angular headlamps give it a futuristic look and now Matrix LED technology comes as an optional feature while the rear lights have a new darker interior design which adds to the appearance.  The front bumper gets mild visual changes with the aggressive air vents.

Thankfully the nip-and-tuck stops there as the 4.0-litre V8 twin-turbo TSFI engine remains the soul of the RS7. It still pumps out a mindboggling 552bhp and 700Nm of torque. Mated with eight-speed tiptronic transmission, it does 0-100km in just 3.9 seconds.

The Audi RS 7 Sportback is fitted with 20-inch forged lightweight alloy wheels as standard but there is an option for 21-inch cast aluminium wheels which are available in three different colours. Alternative carbon fibre-ceramic discs are also available as an option and the Electronic Stabilisation Control (ESC) features a Sport mode that can deactivate it altogether, if you are adventurous.

The RS7 is available in four new colours including the metallic ‘Floret Silver’, ‘Glacier White’ and ‘Mythos Black’ and ‘Sepang Blue’.