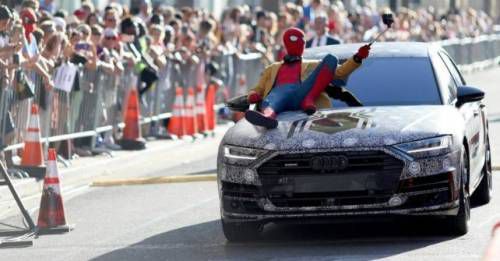 Leading up to the global debut of the new A8 on July 11, Audi has been dropping teasers for quite some time now. These teasers commenced with some technical aspects of the car like its hybrid system and the suspension. But now the company has showcased a camouflaged version of the new A8 at the Spiderman Homecoming premiere in Hollywood. But what has the car got to do with the movie, you ask? Well, Audi has a knack for product placement - remember the R8 in the Iron Man movie?

At the premiere, the new Audi A8 wasn't wearing a standard camouflage - a special one was made for the purpose which looks like spider webs. There are also Spiderman logos at various places on the body and a large black spider on the bonnet. Of course, being heavily camouflaged it is difficult to decipher design details but it is pretty clear that the new A8 has its front inspired from the Audi Prologue and Prologue Avant concepts.

Audi's association with the upcoming Spiderman movie doesn't end with the premiere. The company said that the car also has a cameo in it which will give us a glimpse before its global unveiling on July 11. While details of the car are still few and far, so far we know that it comes with a high-tech start/stop system and an active suspension.