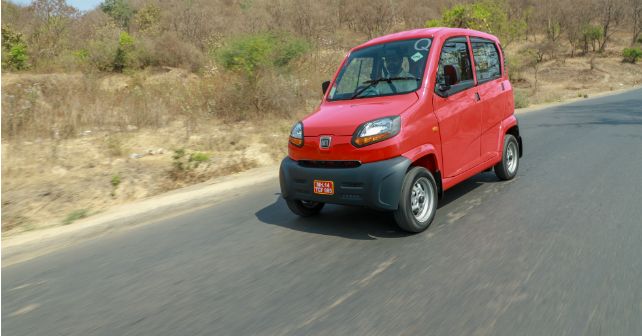 The Bajaj Qute quadricycle is available in two variants -petrol and CNG.

The Qute’s been approved to be sold in India under a new ‘quadricycle’ category, which was introduced by the Ministry of Road Transport and Highways (MoRTH) in November 2018. This category will only include ‘non-transport’ vehicles, meaning the Qute can only be used as a personal mode of transport.

Coming to the technical details of the Qute, it’s a four-seat quadricycle that’s powered by a liquid-cooled 216cc single-cylinder engine that develops 13bhp of power and 18.9Nm of torque. The CNG version incorporates the same engine, but the power and torque figures are even lower – 11bhp and 16.1Nm, respectively. In both the variants, power transmission duties are carried out by a dashboard-mounted five-speed sequential manual gearbox. And, yes, it's rear wheel drive. Given the engine specifications though, the performance is nothing to write to home about, but then Bajaj claims that it can hit a top speed of 70km/h. The company also claims it’ll return a fuel efficiency of 35km/l (petrol) and 43km/l (CNG).

In terms of features, well, there aren’t any, to be honest. No air-conditioning and no power steering even. Dimension wise, it is 2,752mm long, 1,312mm wide and 1,652mm tall. The wheelbase is 1,925mm. The quadricycle only weighs 425kg. The luggage capacity is 20kg, but that’s at the front, since this a rear-engined vehicle.

At the moment, the Qute is only available in six states. However, in the coming time, it’ll be reaching to more markets in the country.