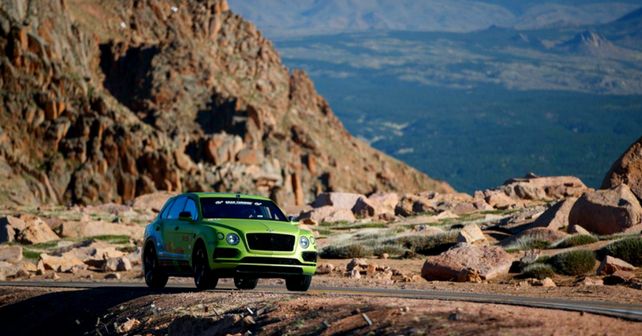 A Limited Edition model has been announced to celebrate this record run.

The Bentley Bentayga has claimed a new record for production SUVs at the 2018 Pikes Peak International Hill Climb.

Driven by two-time champion Rhys Millen, the Bentayga completed the 19.98km course in 10 minutes 49.9 seconds by averaging 107.02km/h. This was nearly two minutes faster than the previous record. The course consisted of a climb of almost 5,000 feet through 156 corners.

A few changes were made to a standard Bentayga in order to comply with Pikes Peak rules. The front seats were replaced with racing versions, while the rear seats were completely removed. Also, a roll cage and fire suppression system were installed. The choice of tyres were Pirelli’s DOT-marked range, and a production-specification Akrapovic sports exhaust was fitted as well.

Immediately after his run, Rhys Millen said, 'What an incredible machine. To take a luxury SUV with minimal modifications and be able to drive up this course in under 11 minutes is a huge testament to the performance and level of engineering in the Bentayga. I had a great run – the car was planted all the way up and gave me the confidence I needed to push hard. I’m delighted to take the SUV record for Bentley and for everyone that’s been involved in this project.'

To celebrate the record-breaking run, Bentley has introduced a new Limited Edition Bentayga, limited to just ten cars. It includes bespoke elements like special paint schemes, 22-inch wheels in special finish, standard black specification and Pikes Peak motif on the fenders. Sports Exhaust and Touring Specification pack complete this special edition. However, this model will only be sold in Europe and the US.