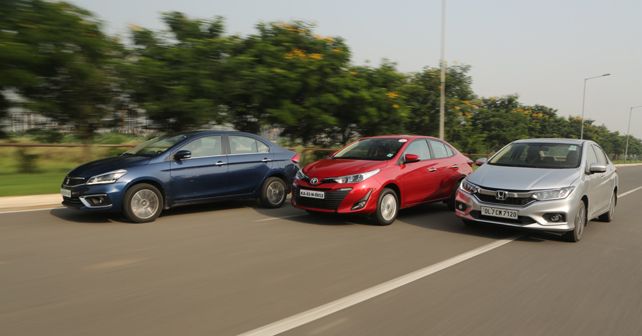 The end of 2018 proved to be particularly challenging for domestic carmakers, owing to a sharp decline in consumer demand that resulted in a consistent drop in monthly sales figures. Here's a brief overview of how the top-six selling car brands fared in the final month of 2018.

The final quarter of the year produced mediocre domestic car sales figures. While there was a bit of a rise in sales numbers in September, the overall figures have only gone down since. In December, the overall domestic passenger vehicle sales reached 2,36,091 units, the lowest monthly total for 2018. Amidst this slump, let's take a look at how the top-sellers fared...

Maruti Suzuki remains the undisputed leader of Indian domestic car sales, which is not much of a surprise. However, while it remains clear of the rest of the competition by a big margin, it's individual performance has been rather questionable throughout the year. In comparison to November, when it sold a total of 1,43,890 units (Passenger Vehicles), the Manesar-based manufacturer sold 24,086 fewer units December, thereby witnessing a negative Month-On-Month (MoM) growth rate of -16.73%. However, some respite for the brand comes from its YoY growth rate of 1.04 per cent, as it sold 1,244 units more than last year during the same time period.

Hyundai, despite claiming the second spot among the top-six, failed to improve upon its sales figures of November and sold 1,616 fewer units last month, with figures touching 42,093 for December. This gave the brand a negative MoM growth rate of -3.7%. This is a sharp decline for the South Korea-based manufacturer, keeping in mind that it registered its highest monthly sales figure for 2018 in October, with 52,001 units. However, compared to its performance in December 2017, the brand has registered a decent YoY growth rate of 4.8%, by selling 1,935 units more.

Tata Motors seemed to be in the same boat as Maruti Suzuki during the month of December as the domestic manufacturer posted a negative MoM growth rate of -16%. Compared to November 2018, Tata sold 2,722 fewer units in December. On a YoY basis too, the carmaker performed similarly to Maruti Suzuki by posting a  growth rate of just 1.55%. However, with the launch of the Harrier just a few days away, the carmaker will surely pose a tough challenge to its competitors in the coming months.

Impacted by the overall decline in demand as well, home-grown carmaker Mahindra also put up a lukewarm performance in the final month of 2018 by selling 14,049 units. As a result, the brand posted a negative MoM growth rate of -7.29 per cent. On a YoY basis too, Mahindra achieved a negative growth rate of -1.32%. The Bolero, at 4,832 units, remained the highest-selling Mahindra model.

Honda Cars India Limited (HCIL) remains one of only two car brands in the top-six lineup to have registered positive growth, both on a MoM and YoY basis. In December 2018, Honda sold 13,139 units, 133 more than November. Compared to the same time last year, Honda sold 497 units more in December 2018 and posted a YoY growth rate of 3.93%. At 5,565 units, the Amaze remained the top performer, followed by the City at 3,295 units.

While Toyota may have secured the last spot among the top-six, it's the only carmaker in this line-up which has been able to improve upon its sales figures most effectively. This is evident from the fact that the Japan-based carmaker recorded a healthy MoM growth rate of 10.40%, by selling 1,115 units more than November. The brand can also brag about its YoY growth, which came up to 9.66%. In December 2018, Toyota managed to shift a total of 11,836 PV units.

Volvo India seems to have ended 2018 on a high note as the company announced a 30% YoY growth during CY18. The Swedish carmaker sold 2,638 units in 2018, 609 more than what it could manage in 2017. Interestingly, Volvo managed to surpass its 2017 sales numbers within the first ten months of 2018. This growth can be primarily attributed to models like the XC40 and the XC60 which are doing well in the entry-level and mid-level luxury SUV segments, respectively. 2018 was also a highlight year for the brand as the XC40 also managed to win the inaugural 2019 'Premium Car Award' by ICOTY, defeating its German rivals to claim top honours.