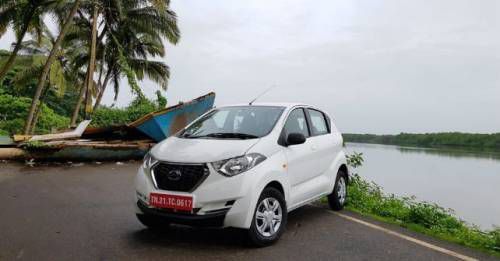 The more powerful version of Datsun’s sub-compact hatchback is set to arrive on July 26.

Datsun India has started accepting pre-orders for the upcoming redi-GO 1.0-litre from July 11, 2017. The hatchback can be booked with a fully refundable down payment of Rs. 10,000 at Nissan and Datsun dealerships. Deliveries of the vehicles to owners owners will commence from July 26.

The Datsun redi-GO is powered by a 999cc, 3-cylinder petrol motor, which also does duty on the Renault Kwid 1.0-litre. This motor is capable of producing a maximum power of 67bhp along with 91Nm of torque. Power transmission from this motor is handled by a 5-speed manual gearbox. A 5-speed Automated Manual Transmission (AMT) is also offered on the Kwid, but Datsun has given it amiss for the time being. The possibility of the AMT sailing in later is very likely.

A quick recap for uninformed – Renault and Datsun’s parent company, Nissan, are in a strategic alliance where the two companies share engines and platforms with each other. The Datsun redi-GO, in fact, is mechanically very similar to the Renault Kwid. The current 0.8-litre motor which propels the redi-GO is also sourced from the Kwid, so it was only a matter of time when the redi-GO took advantage of the bigger engine on offer on its cousin.

The bigger engine will be only offered on the upper-grade T(O) and S trims of the Datsun redi-GO. With the 1.0-litre engine, the Datsun redi-GO is expected to get dearer by at least Rs. 30000 as compared to the 0.8-litre model. At this price range, it will go against the likes of Maruti Alto K10, Hyundai Eon 1.0 and Renault Kwid 1.0.

Jerome Saigot, vice president, Datsun India said, "At Datsun, we are constantly striving to challenge the status quo and disrupt conventional thinking about the entry car segment in India. Today’s youth want a car that shows their personality with style, and redi-GO 1.0-litre is ready to meet their needs with more power and convenience.”