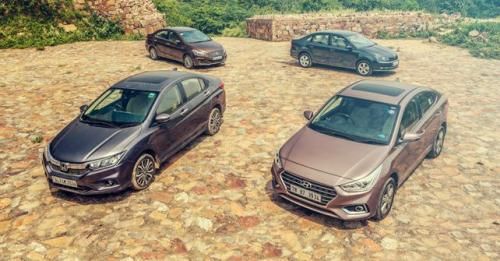 The year-end car sales during December 2017 were driven by lucrative discounts and offers to clear up the inventory. However, despite that, not all carmakers were able to see a surge in their year-on-year sales.

India’s largest selling carmaker sold a total of 130,066 units in December 2017, growing 10.3 per cent over the same period of the last fiscal. This includes 119,286 units in domestic market and 10,780 units of exports. The company had sold a total of 117,908 units in December 2016. While Maruti models did pretty well, the Ciaz witnessed a significant 35.8 per cent decline in its sales as compared to last year.

Hyundai had a marginal 0.3 per cent increase in its year-on-year sales. The all-new Verna, during the month of December 2017, could not outsell the Honda City and Maruti Ciaz. The Korean company could only move 1,953 units of Verna last month, while the City topped the mid-size segment with 4,365 units.

Mahindra’s passenger vehicle sales fell by 7 per cent at 15,543 units in December 2017 as compared to 16,799 units during the same month in 2016. The company has recently refreshed both the Scorpio as well as the KUV100 to keep the sales intact. However, the company has lost its UV market leadership to Maruti Suzuki after the launch of Vitara Brezza.

Tata has managed to steadily increase its year-on-year sales momentum due to the launch of new products. In December 2017, the company sold 14,180 units as against 10,827 units a year before, which is a growth of 31 per cent. Tata also recorded the highest ever December sales for passenger vehicles since 2012, and the retail sales for this month was also the highest in last six years.

Honda registered monthly domestic sales of 12,642 units in December 2017 against 10,071 units in the corresponding month last year, registering a growth of 26 per cent. The City mid-size sedan outsold both the Verna and Ciaz during the last month, while the WR-V crossover has been consistently selling well (3,760 units last month). However, sales of other Honda cars like the Amaze, BR-V and Jazz were nothing to write home about.

The American company sold 5,087 vehicles in domestic sales compared to 5,566 vehicles the corresponding month last year. However, Ford’s exports in December stood at 24,708 vehicles against 17, 904 vehicles a year ago.

Toyota’s sales slipped to 10,793 units in December 2017 compared to 12,747 units during the previous year, resulting in a decline of 15.32 per cent. However, the Japanese company claims that it has achieved the milestone of recording the highest ever UV sales (Innova and Fortuner combined) during 2017 in India.