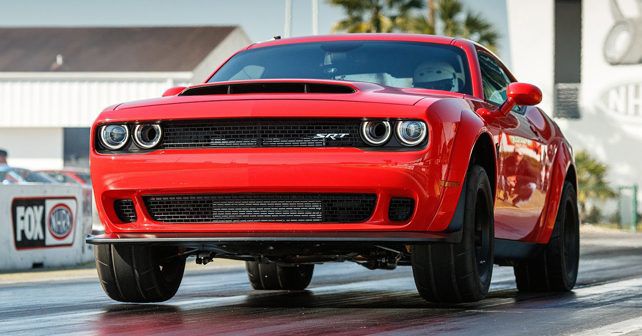 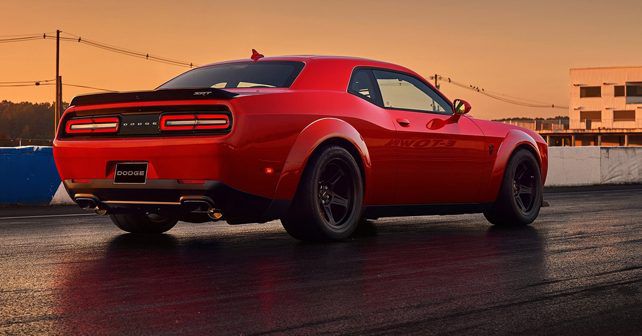 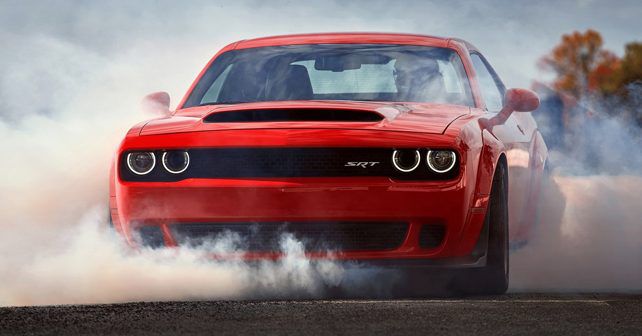 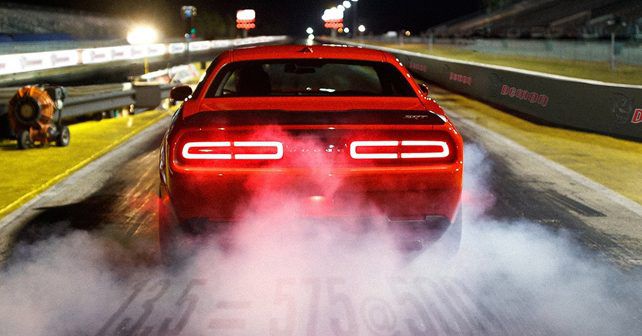 Headlined by an 840bhp 6.2-litre V8 HEMI, the Dodge Challenger SRT Demon is the ultimate muscle car for the drag strip.

If you want to know what the automotive equivalent of going fully mental is, please take a look at the recently unveiled Dodge Challenger SRT Demon. It’s essentially a road-legal muscle car that’s made to shatter drag strip records. And the way in which it’s said to go about doing its business is unlike anything we’ve ever witnessed before...

The Challenger SRT Demon boasts some mad numbers to start with. It’s powered by the same 6.2-litre HEMI V8 that does duty in the Challenger SRT Hellcat, Charger SRT Hellcat and the newly revealed Jeep Grand Cherokee Trackhawk. But, in here, the V8 develops 840bhp as against 707bhp, while torque is also up to 1,044Nm. As per Dodge, this is done by installing a larger supercharger of 2.7-litres versus 2.4-litres that allows an increase in boost pressure from 11.6psi to 14.5psi. Dodge claims the engine in the SRT Demon is the world’s most powerful factory production V8.

Power reserves from the engine are fed ferociously to the rear wheels via an uprated eight-speed automatic. And the performance that follows, as a result, is mind boggling – 0-100km/h is done in 2.3 seconds, making it the fastest production car in the world. On a drag strip, it apparently did a quarter mile in just 9.65 seconds, which means it’s also the fastest production car to have done that.

More amusing than that is the fact that the Challenger SRT Demon is now the world's first production car to lift the front wheels at launch. It has set the world record for longest wheelie from a standing start by a production car at 2.92 feet, which is certified by Guinness World Records. Not only that, the driver of the SRT Demon will also experience the highest g-force (1.8g) of any production car while launching the car in a straight line!

Now to know how all that is done, here’s a list of all the modifications that SRT Demon gets over the “lesser” Challenger SRT Hellcat. It has wider, 315/40-R18 Nitto street-legal drag radials for improved grip - 40 per cent more launch force compared with SRT Hellcat tyres. It has something called “SRT Power Chiller” that redirects air conditioning refrigerant to chill the air cooler. Then, once you shut down the engine after a hot run, it has an “After-Run Chiller” that runs the cooling fan and the low-temperature circuit coolant pump. There’s also this “TransBrake” function that locks the output shaft of the transmission to hold the car before launch, without frying the brakes. It also has a Drag Mode suspension setup that transfers weight quickly to the rear wheels for better traction. Also, the SRT engineers have ditched the front passenger seat and rear seat in order to reduce the weight of the vehicle. If you want them to be reinstalled, though, it can be done for $1 each.

Production of the Dodge Challenger SRT Demon will be limited to 3,300 units (3,000 for the US & 300 for Canada). Customer deliveries will begin in the second half of 2017. As for markets which do not get the SRT Demon, including us in India, all we can do is watch it burn some rubber at the dragstrip and revel in its madness...