Meet the Faraday Future's first production car, the FF 91. It is claimed to be the fastest accelerating EV in the world!

Electric car start-up firm Faraday Future has unveiled its first production car at the 2017 CES (Consumer Electronics Show) in the US. Billed as the FF 91, the new electric car has straightaway stolen the performance claims from its arch-rival, Tesla. How? The FF 91 is touted as the quickest EV in the world!

As per Faraday Future, the FF 91 will accelerate from 0-100km/h in just 2.39 seconds – which a tenth faster than the Tesla Model S P100D with Ludicrous mode. This is thanks to its 130kWh battery pack that develops nearly 1,050bhp of power along with 1,800Nm of peak torque. And if you don’t go flat out all the time, the FF 91 will return over 700km of range, claims the maker.

Performance aside, the FF 91 is going to be a hugely practical vehicle to live with its generous dimensions. The FF 91 is 5,250mm long, 2,283mm wide and 1,598mm high along with a wheelbase of 3,200mm. Design wise, the FF 91 looks part crossover part sedan. Among some of its exterior highlights, it features sleek LED headlamps, 22-inch wheels and a roof made entirely of glass. The glass roof and side windows also feature PDLC (Polymer Dispersed Liquid Crystal), which can tint the glasses as soon as they are tapped. 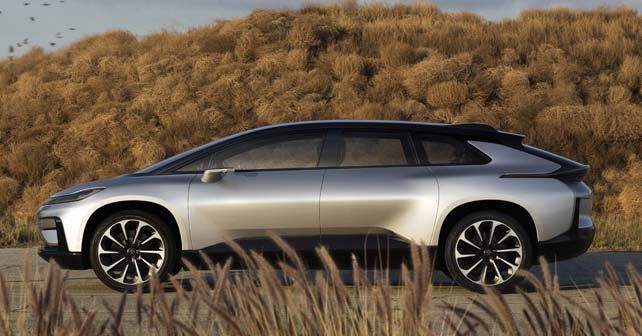 The Faraday Future FF 91 packs a raft of electronic gadgets. For autonomous driving, the car has been equipped with a retractable 3D LIDAR detector disc that operates in conjunction with 10 HD cameras, 13 long and short range radars and 12 ultrasonic sensors. The FF 91 also comes with driverless valet parking function. Other tech highlights include a single HD display in place of the rear view mirrors. The system collects data from all the sides, eliminating blind spots. There’s no key to unlock/lock the car as well – it can be done via facial recognition or touch buttons on doors.

Production of the FF 91 will begin in 2018, but it can be pre-booked with a refundable sum of $5,000 in the US. The company hasn’t revealed the exact sticker price of the FF 91 as yet though.