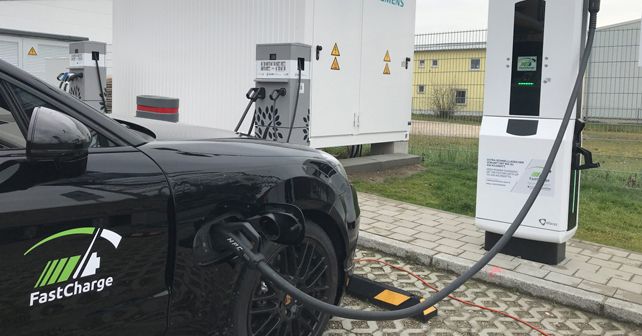 BMW, in conjunction with Porsche, Siemens, Allego and Phoenix Contact E-Mobility (More commonly referred to as the 'FastCharge' Consortium), has developed a new, super-fast EV charger which is capable of delivering a charge rate of up to 450kW. The FastCharge system, which still remains a prototype, apparently trebles the charge rates of the world's rapid chargers at present. What this means is that in the future, when this becomes commercially viable, electric charging will become more or less as time-consuming as refilling a car at a fuel pump! What this also means is that EV users will be able to get a driving range of 100km in a matter of three minutes, with full charging of the battery pack taking place in around 15 minutes (Tested on a BMW i3 fitted with a 'special high-voltage battery').

To put the scale of the leap into perspective, a majority of rapid EV chargers around the world deliver a charge rate of 50kW, while Tesla’s Superchargers deliver a max rate of 120kW. Using a 50kW charger, a standard Nissan Leaf can take up to 60 minutes to gain around 60 per cent charge while a Tesla Supercharger can do so in about 40 minutes.

However, in order to make use of a FastCharge unit at its full potential, EVs need to have suitable battery packs which can support such high charge rates. At present, Audi's latest electric vehicle, the e-tron, in only capable of 'receiving' 150kW. Porsche's upcoming Taycan will be the closest in terms of supporting the FastCharge as it aims at accepting a charge rate of 350kW. However, developers claim that a FastCharge unit is capable of automatically detecting the capabilities of the vehicles plugged into it, and adjusting its rates accordingly.

What's interesting here is that the prototype Taycan used in the test was able to achieve a 400kW charge rate, which is beyond the standard car's capability. While Porsche has not revealed much about this 'prototype vehicle', they did reveal that it was equipped with a 90 kWh battery pack and it was able to add about 100km of range in just 3 minutes. The FastCharge project has also received a funding of £7million from the German transport ministry. At this point, neither Porsche nor BMW have revealed a date to bring the FastCharge technology into mass production.