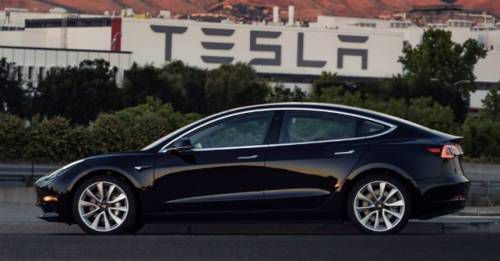 Last week we reported that the new Tesla Model 3 has passed all regulatory requirements prior to schedule. It is thanks to this that the electric car maker has been able to roll out the car earlier than expected. The company rolled out the first ever Model 3 from their factory on July 8. The Model 3 is the company’s fourth car to be developed, third in its current line-up, apart from the Model S and the Model X.

The new Model 3 slots below the large Model S and is priced starting $35,000 (Rs 22.6 lakhs approx). The first Model 3 was reserved for Tesla board member Ira Ehrenpreis, who gifted it to Elon Musk as a present for his 46th birthday, which he recently celebrated his birthday on June 28. Ehrenpreis will get the second Model 3 to roll off the line.

Demand for the new Tesla offering has been high and the company plans to ramp up production to meet the demands. In fact, Musk has quite an expansion plan for the company with a target of 5,00,000 units produced annually by 2018. The first batch of 30 Model 3s will be delivered to customers on June 28.

In anticipation of the Model 3, stock prices of Tesla Inc. have been rising and now that the car is up for grabs, it will be interesting to see how it affects the company’s stocks. Meanwhile, the American electric car maker has expanded to produce battery systems for solar power. Tesla has also managed to bag a contract to build the world’s largest battery system in Australia. Interestingly, this project needs to be completed in just 100 days, else Tesla will have to offer the 100-megawatt storage solution for free. This system is capable of providing electricity to 30,000 households.