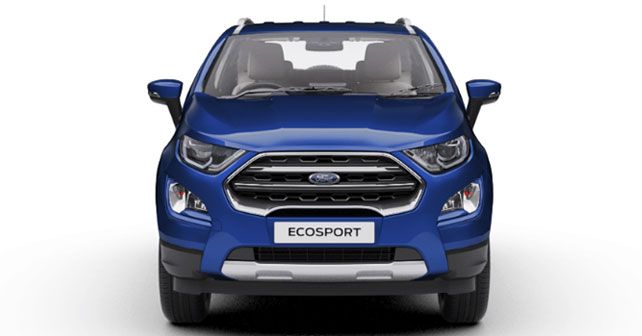 Ford’s EcoBoost engine is all set to make a comeback in India with the launch of the new Titanium S variant.

Ford India has officially announced that the company will launch a new version for its EcoSport compact SUV on the 14th of May. As reported by us earlier, the EcoSport Titanium S, which has been due for launch, comes with added bells and whistles. For starters, like the Figo S, the EcoSport Titanium S is expected to get a blacked-out treatment to an extent. This includes a black roof, black roof rails, black headlamp bezels, a black rear spoiler, new gun metal finish 17-inch alloy wheels and a darkened front grille. Phew, that’s a lot of black stuff!

Moving on to the more important bits, the new Ford EcoSport Titanium S is also supposed to get a sunroof and HID headlamps, both are firsts for the EcoSport since its market launch in India. The car is also reported to get a new driver information display screen in the instrument cluster.

But the bigger news here is that the Titanium S will mark the return of the 1.0 litre, three cylinder, EcoBoost turbo petrol engine for the EcoSport. The engine will be good for 123bhp of max power and 170Nm of peak torque. A six-speed manual gearbox is also on the cards.

Along with the Titanium S, Ford is also likely to launch a new Signature Edition trim version for the 1.5 litre petrol and diesel EcoSport models. This variant too will get new 17-inch alloys, a new paint shade and additional safety features such as stability control and hill start assist.

So, if you were about to put your money down for an EcoSport, perhaps it’s a good idea to hold your horses till the 14th of May.