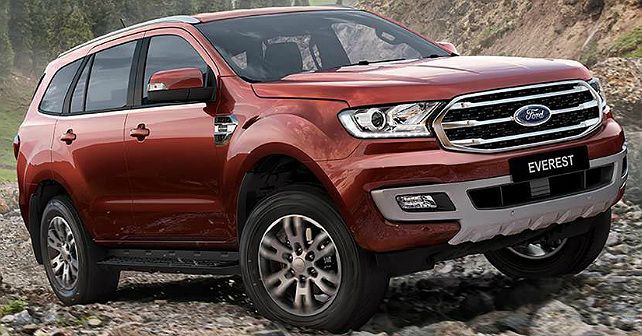 The recently revealed Ford Endeavour facelift, which is India-bound for sure, has been just put on sale in Thailand. The Thai-spec model, which is usually similar to the India-spec model, has gained new internals with the 2018 update.

Available in two states of tune, the new 2.0-litre engine powering the Endeavour facelift makes 177bhp/420Nm in its lower spec and 212bhp/500Nm in its higher spec. In comparison, the older 2.2-litre and 3.2-litre engines made 158bhp/385Nm and 197bhp/470Nm, respectively. The new motor also comes mated to a new 10-speed torque converter gearbox.

Since the Thai-spec Endeavour facelift has gained this new motor, we can expect these changes to carry forward to the India-spec model as well. However, nothing is confirmed as of now. The facelifted Endeavour might launch in India towards the end of this year.

Changes made to the facelifted Endeavour are quite subtle. There is a new grille with thinner chrome slats, a lightly updated bumper and new alloy wheels. On the inside, it gains Ford’s latest Sync 3 infotainment system with an 8.0-inch touchscreen, navigation and Apple CarPlay & Android Auto integration. There is also an all-black colour scheme for the dashboard.