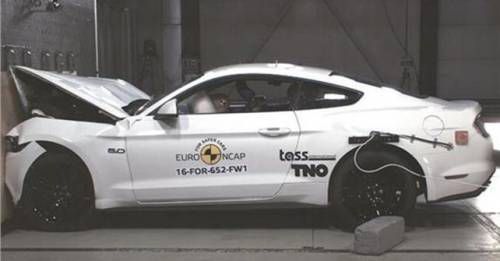 The Ford Mustang GT has now been elevated to a three-star safety rating by Euro NCAP.

Earlier in January this year, the European-spec Ford Mustang GT (which is the same spec sold in the Indian market) had undergone Euro NCAP's safety crash test. At the time, the two-door fastback was awarded a dismal two-star rating.

The poor crash test rating was due to the performance of the car during the frontal offset and full-width frontal tests which were deemed inadequate.

After receiving criticism over the result, Ford made changes to the Mustang which has now elevated the car to three stars. The 2017 model year Mustang now comes standard with Ford's Pre-Collision Assist package. This includes Pedestrian Detection, Forward Collision Warning and Autonomous Emergency Braking. Additionally, the Mustang has now been equipped with Lane Keeping Assist as well. This new addition of safety equipment being offered as standard with the Mustang has now elevated it to a three-star rating.

No changes were made to the vehicle’s structure and it is identical to the one crash tested earlier this year. Therefore, the results from the previously tested vehicle were used. However, Ford has updated the restraint system to prevent the front airbags from bottoming out for the driver and passenger. Additionally, the automatic airbag deactivation for the front passenger seat (for child occupant detection) now meets Euro NCAP’s guidelines.

The Mustang GT has been awarded an adult occupant safety rating of 72%, 32% for child occupant safety, 78% for Pedestrian safety and 60% for to the additional safety assist equipment. The updates offered on the  Mustang GT is available on orders placed from July 2017.