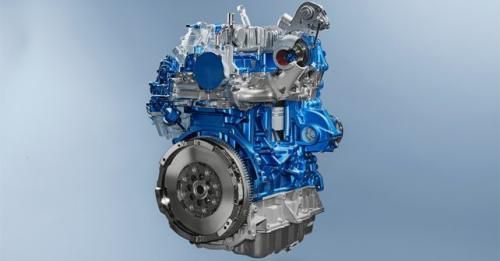 In recent times, diesel engines have earned quite a bad reputation around the world. But Ford is doing its bit to make compression ignition engines more efficient and cleaner than before. The Blue Oval has come up with a new  2.0-litre diesel engine, which is christened the EcoBlue. Claimed to be a game changer, the new diesel powertrain will replace the company’s old 2.2-litre TDCi Duratorq engine. The EcoBlue diesel engine will first make its way in the brand’s commercial vehicles, and will eventually be introduced in passenger cars.

Now coming to the highlights of the new environment-friendly powertrain. As per Ford, the new EcoBlue engine has been developed from the ground up and it's 13 per cent more fuel efficient than its predecessor. This is mainly done by reducing internal friction with the help of a 10mm offset crank design, modular camshafts and a belt-in-oil design for the camshaft and oil-pump drive belts (similar to the EcoBoost petrol engines).

Next up is the new turbocharger which has been made more compact. This is done by incorporating an aerodynamically advanced turbine wheel and compressor – made from alloys used in rocket engines. The turbine is now smaller by almost 10 per cent whereas the compressor wheel’s diameter is reduced by 15 per cent.  The reductions decrease inertia, enabling faster boost performance with compressor speeds reaching up to 240,000 rpm, thereby, delivering improved low-end torque. This would ultimately result in better performance in city driving where low-range torque is required the most, says Ford. The manufacturer also claims that at 1,250rpm the torque delivery has improved by 20 per cent.

The EcoBlue engine meets Euro VI emission standards that are set to be introduced in September 2016 in the European markets. To meet these norms, vehicles are required to produce 55 per cent less NOx emissions compared to Euro V standards.

In the initial phase, the EcoBlue 2.0-litre diesel will be offered in three different states of engine tune - 103bhp, 128bhp and 168bhp - in commercial vehicles. More powerful applications of the engine ranging between 197bhp and 236bhp will be introduced later on. Smaller EcoBlue engines – including a 1.5?litre variant- are also being planned.

In India, Ford currently offers the Endeavour with two engine options – one of which is the 2.2 TDCi diesel motor. Considering the new 2.0-litre EcoBlue replaces the 2.2-litre unit, it may as well make it to the Indian market in the coming time.