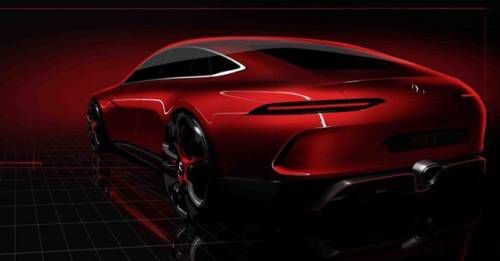 What you see in the picture above is the first teaser of Mercedes’ four-door sports sedan that’s based on the AMG GT. For a simpler understanding, think of it in this way – what Porsche Panamera is to the 911, the GT sedan will be to the Mercedes’ flagship sports car. At the moment, it’s only a concept, but we’ll have more details on it once it debuts at the upcoming 2017 Geneva Motor Show.

Mercedes hasn’t revealed any technical details of the four-door saloon, but it's understood that it’s going to be built on the same architecture as the AMG GT. This would mean that it will follow a similar mechanical layout – front engine rear-wheel drive – like the sports car, although it’ll come with a stretched body and two more doors. It’s unlikely that it’ll be a sedate, everyday sports sedan, though – just notice that rear diffuser at the back. While we’d reserve our judgment on its looks till the full unveiling, we think it's quite gorgeous from the back.

The AMG GT sedan is expected to retain the 4.0-litre twin-turbo V8 of the sports car, meaning it will have a power output in the range of 450-500bhp. Expect it to handle like a sportscar, too, since it’s underpinned by the same platform as the GT since it’s one of the best handling sports cars in the world.

As of now, that’s all the information that we’ve got about this suave new Mercedes GT sedan. More details will be out at the official unveiling of the concept at the Geneva Motor Show. So, stay tuned...