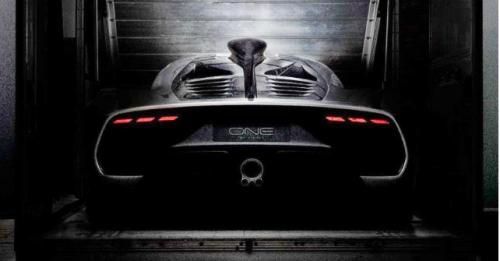 Set to make its debut at the upcoming Frankfurt Motor Show, the Mercedes-AMG claims the Project One hypercar will exceed a top speed of 350km/h

It seems like Mercedes-AMG is really going full power in the performance car segment. Just a few weeks back, they brought in ‘the beast of the green hell’ – the GT R to India that claims a top speed of 318km/h. Now, they are all set to take the wraps off a new hypercar at the upcoming Frankfurt Motor Show. Codenamed Project One, the Stuttgart-based car maker has been creating a lot of hype around this new offering with some teaser images. But in the latest (and possibly the last), they revealed that the car is capable of recording a top speed of 350km/h.

The Mercedes-AMG Project One extracts this sort of performance from a 1.6-litre turbocharged V6 motor that has been inspired from Mercedes’ Formula 1 endeavours. Combined with an electric motor that powers the front wheels, the Project One pumps out power of around 1000 horses.

With just a few days to go before the official unveiling of the Project One, Mercedes-AMG has released another teaser image – this time around showing the rear of the car. While it is difficult to decipher the complete details of the car, certain design elements like the wide fender with the integrated LED taillights, the large central exhaust pipe, and a carbon fibre roof scoop are clearly visible. Mercedes-AMG hasn’t released any images of the interior of the car.

Going by the teaser images and performance it claims, we won’t be surprised if the Mercedes-AMG is one of the showstoppers of the 2017 Frankfurt Motor Show. While AMG is celebrating its 50th anniversary this year, the Project One will surely be a great car to do it with.