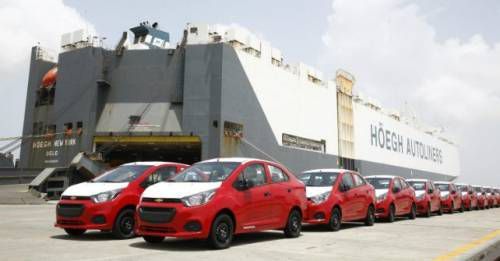 General Motor India announced today that the first shipment of Beat sedans has been readied to be sent to Latin American markets. After commencing production on June 5, the company has now loaded 1,200 cars for export. General Motors claims that its facility in Talegaon is one of the biggest hubs for export and has brought them to become the third largest passenger car exporter in May 2017. General Motor exported a total of 8,297 units in May 2017, their personal best.

GM India VP – Manufacturing, Asif Khatri said, “Our Talegaon facility is a key export manufacturing hub for GM. GM India’s exports have more than tripled in the past year.  GM was India’s third largest passenger vehicle exporter in May - recording our highest monthly total of vehicle exports at 8,297 units.”

The car that is being exported is what was unveiled during the 2016 Auto Expo as the Essentia. Before commencing mass production, the car was exhaustively tested on Indian roads where it has been spotted on numerous occasions. These spy shots had led to numerous speculations and rumours about the launch of the compact sedan in the Indian market. Bringing all speculations to an abrupt end, the company announced its withdrawal from the Indian market last month. Last fiscal, they could only manage to sell 25,823 units – a market share of less than one percent. However, General Motors will continue to produce cars in Talegaon for export purposes. While Chevrolet has been shipping cars to Mexico since last year, export of the Beat hatchback to Latin American markets only started a few months back.