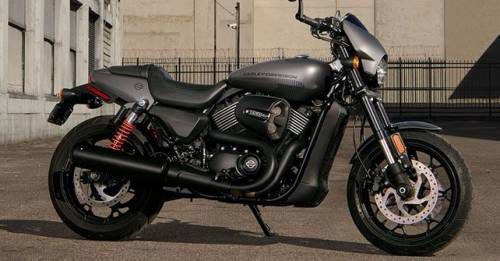 Harley Davidson has launched the new Street Rod in India for an ex-showroom, Delhi price of Rs. 5.86 lakh.

The Street Rod is powered by a liquid-cooled, SOHC 8-valve 60° V-Twin High Output Revolution X 750cc engine. The engine is based on the same unit found in the Harley Davidson Street 750, however it has been refined further and tuned to produce 11% more horsepower and 5% more torque. Harley Davidson has not revealed exact power and torque figures, however, they have claimed that the engine delivers peak power at 8,250 rpm, and maximum torque at 4,000rpm. The engine has been tuned to deliver good midrange performance between 4,000-5,000 rpm.

The bike has a chassis that features a revised geometry to compliment the engine’s performance. The front end features a rigid 43mm inverted forks with a 27° rake. The bike sits on 17-inch front and rear wheels with 120/70 R17 M/C 58H front and 160/60 R17 M/C 69H rear tyres. ABS will be offered as standard with dual-piston 300mm front disc brakes.

The reach shock absorbers now feature an external reservoir to increase fluid capacity and maintain damping consistency with travel now increased to 117mm and the swing-arm has also been elongated to accommodate the the new suspension.

The Street Rod gets an all new LED tail light with H-D signature lighting and will be offered in Vivid Black, Charcoal Denim and Olive Gold colour options to accentuate its Dark Custom style.

The new Harley Davidson Street Rod is now open for bookings and test rides for the new bike will commence across the country from April 21, 2017.