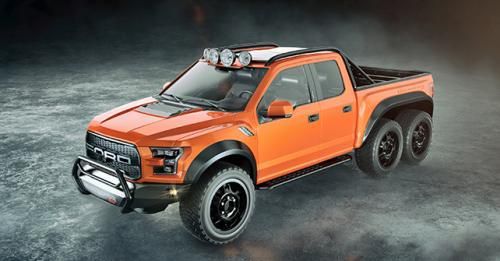 The standard Ford F-150 pick-up to any normal human being would seem like a fairly large vehicle on its own. Then there is the more powerful, aggressive and tougher Raptor model for the individuals who are more of the adventurous type. Powered by a 3.5L EcoBoost V6 which develops 443bhp and 510Nm of torque, one would say, it is more than enough.

As it turns out, someone in Texas felt it needed more power and more importantly, more wheels. John Hennessey’s tuning outfit Hennessey Performance, at SEMA in Las Vegas has debuted the VelociRaptor 6X6 and quoted a price tag of $295,000. In comparison to its German rival, the G63 AMG 6X6 from Mercedes, the VelociRaptor 6X6 seems to come at a bargain but only 50 of these 6X6 monstrosities will be built.

If you want the Velociraptor 6X6 with added power, one can opt for the ‘600’ spec which will come with two larger turbos attached to the V6 EcoBoost engine which bumps the power up to 591bhp which is transferred through Ford’s latest 10-speed gearbox. Additionally, an upgraded front mounted intercooler, remapped ECU, and a tweaked exhaust system to deliver the grunt. A bigger brakes package from Brembo are offered along with larger wheels and tyres, upgraded LED lights, new interior options and you can also choose to make it bulletproof as well.