Here is how all-new Honda Amaze is made 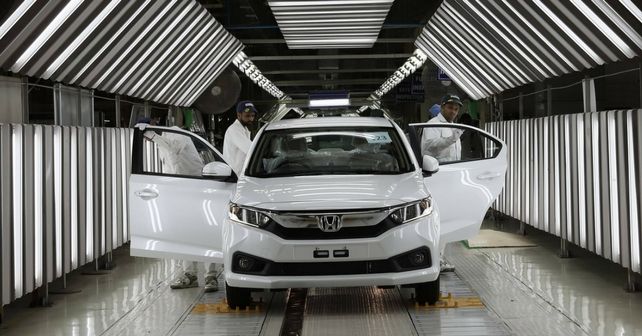 The second-generation Honda Amaze will be launched in India on April 16, 2018.

Honda India has officially commenced the production of the upcoming second-gen Amaze at its Tapukara Plant in Rajasthan.

The Japanese company has also released an official video (linked below) where it briefly shows the production cycle of the car. While the video is far from being technically detailed, it gives a fairly decent idea of the Amaze’s production journey right from the floor pan to the final quality tests, including a robotised installation of various panels and the powertrain.

Honda claims that India is an important market for the Amaze, and therefore, the new model made its world debut at the 2018 Auto Expo. Based on a brand-new platform, the new Amaze sports a 65mm longer wheelbase than its predecessor. The new platform has also added to the car’s interior room, while reducing its bulk at the same time.

Powering the new Amaze are the familiar 1.2-litre petrol and 1.5-litre diesel engines. The petrol makes 89bhp of power and 110Nm of torque. The diesel also gets a first in class CVT option. The 1.5-litre i-Dtec in Amaze produces 99bhp and 200Nm in manual transmission avatar, while the CVT pumps 79bhp and 160Nm.

Commenting on the start of production, Rajesh Goel, Sr. Vice President & Director, Honda Cars India, said, ‘We are delighted to announce the beginning of production of all-new Honda Amaze. This model will be a game changer for Honda Cars India – both in terms of boosting our business and further strengthening our model lineup with advanced technology. The 2nd Generation Amaze has received excellent response from customers since its world premiere at the Auto Expo. As a special gesture to the customers who are booking the car even before knowing the price and variant details, we have decided to offer a special introductory price for the initial 20,000 bookings”.

Launching on April 16, we expect the new Amaze to be priced between Rs. 5.75 lakh and 9 lakh (ex-showroom). Just like the outgoing model, the new Amaze will be offered in four variants – E, S, V and VX.