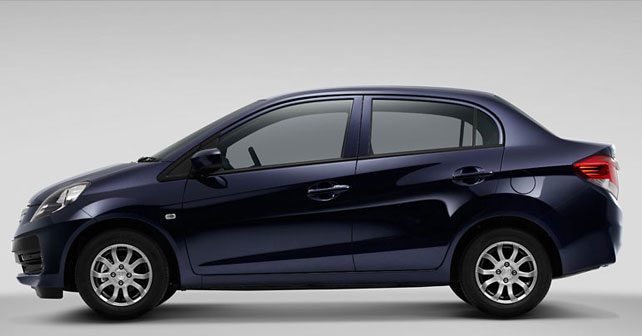 Honda to bring in updated Amaze on March 3, 2016, with cosmetic changes and new features.

Honda is looking to give the Amaze a mid cycle face-lift to spruce up its appeal as the compact sedan has been on sale since 2013. Over its lifespan, Honda has worked on improving the refinement of the diesel version of the car resulting in significant improvements in NVH levels and drive ability. In January 2015, Honda introduced new top-end Option (O) variants of the Amaze featuring a touchscreen infotainment system and a few other tweaks.

And now, Honda is looking to give the car a full blown face-lift featuring a new front end with new bumpers with a more bold design, new headlamps with black borders, a chunky new chrome grille like on the Mobilio. The side profile of the car will remain largely the same apart from maybe a new alloy wheel design.  Around the back, the car will get new tail lamps.

Inside the updated Honda Amaze is where it gets more interesting as the car gets a completely new dashboard that bears resemblance to those of the Jazz and City. The car also gets a new steering wheel with audio controls and there is piano black finish around the stereo. Other than this, the door pads and seats will remain the same as the current model. Equipment levels are expected to be on par as well while top-end variants could get keyless engine start / stop feature.

Under the hood, the Amaze will continue to be powered by the same set of 1.2 litre petrol and 1.5 litre diesel engines with a five-speed manual gearbox and the option of an automatic gearbox in the petrol model.