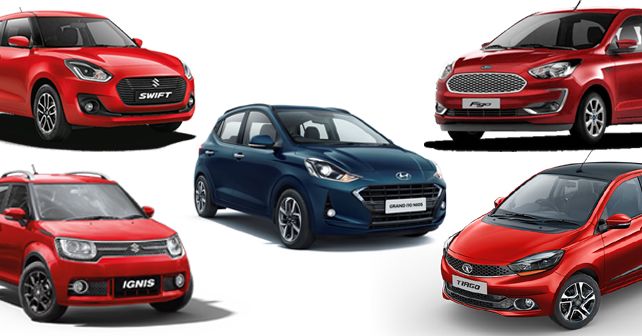 With the Grand i10 now bigger and better-equipped, Hyundai is taking the fight to some of the most established hatchback manufacturers in the country. We take a look at how the Grand i10 Nios compares against its rivals on paper.

If we look beyond the SUV segment, which is highly revered amongst Indian car buyers, the hatchbacks seem to be the next most popular choice of wheels. After all, they're practical, well-equipped, and, definitely, the easiest to maintain & drive around in, especially considering ever-growing traffic in urban metropolitans. So, we pit the newest entrant of this segment – the Grand i10 Nios – against its rather well-established rivals to see if Hyundai has really made a noticeable impact.

While the Grand i10 Nios is a bigger version of its predecessor, it certainly isn't the biggest in the segment. The Figo is the longest out of the five here, but the Swift is just a bit wider. Therefore, the Figo's interior (especially the rear seat legroom) is expected to be the most spacious here (also due to the fact that it has the longest wheelbase here), while the Swift should be better at seating three abreast on its rear seat. The Ignis offers the most headroom, thanks to its 1,595mm height. At 2,450mm, both the Grand i10 Nios & Swift feature identical wheelbase figures, but it's the Tiago's wheelbase that's the most compact, on paper at least. In terms of urban usability, the Ignis again shines through due to its massive 180mm ground clearance. Due to the unavailability of ground clearance figures for the Figo & i10 Nios, we can't really make a fair comparison, but we still expect them to be lower than that of the Ignis.

Straight off the bat, the Grand i10 Nios & Swift have a big advantage over their rivals, as these are the only two models here that are currently available with BSVI-compliant petrol motors & offer AMT derivatives with both petrol & diesel engine options. However, due to the largest capacity petrol motor here (1.5-litre Ti-VCT), the Figo is the highest-powered (121bhp) car here. The Figo also happens to be the most powerful entry-level petrol model (95bhp) as well as the most powerful & punchiest diesel version here (99bhp). The Grand i10 Nios & Swift, once again, feature identical power figures for both their petrol & diesel engines. But, the Swift diesel is expected to be more refined due to its four-cylinder motor. The Ignis diesel was discontinued a while ago due to low demand, and as a result, the Ignis is the only car here that's available only with a petrol engine. With 69bhp & 140Nm, the Tiago's 3-cylinder diesel remains the least-impressive motor of the lot. However, the Tiago redeems itself for being the most efficient petrol car here (23.84km/l). At 28.4km/l, the Swift remains the most economical diesel of the lot.

All the cars here are quite fairly matched in terms of features & equipment list. Due to the recently-announced mandatory safety regulations, features like reverse parking assist, dual airbags and speeding alert are now standard across all models. However, the Grand i10 Nios, which claims to be the best-equipped in its class, really shines through, as it offers the biggest touchscreen (20.25cm) and segment-first features like rear AC vents & wireless phone charging. While the Swift & Figo feature in-build navigation, the latter misses out on important features like projector headlamps and Apple CarPlay/Android Auto connectivity. These features, however, are available on the rest of the cars here.

While the Tiago offers the cheapest entry-level petrol variant of the lot, the Swift is the one with the most expensive top-spec petrol variant. In fact, there is a difference of approximately ₹ 1 lakh when we compare the top-spec petrol & diesel variants of the Grand i10 Nios with the Swift. So, without any doubt, if you're looking for the cheapest alternative, the Tiago makes the most sense. However, if your choice lies between the Grand i10 Nios & the Swift, the former seems to be the more lucrative option, thanks to its more premium outlook. However, the Swift continues to have by its side Maruti Suzuki's unmatched reliability and a low maintenance cost.