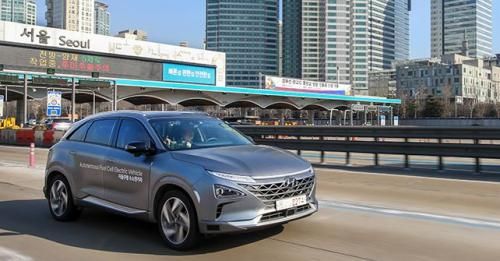 Hyundai Motor has stated that they plan to commercialise level 4 autonomous vehicles in smart cities by 2021 and fully autonomous driving technology by 2030. In order to achieve that, Hyundai has revealed their plans for what they believe is possible in the future with the new Hyundai NEXO – the world’s first fully autonomous fuel cell vehicle.

However, the Nexo has just done what cynics strongly believe is impossible. It has completed a 190km journey from Seoul to Pyeongchang completely by itself with level 4 autonomous driving technology. Not only is it the longest level 4 autonomous driving demonstration completed in South Korea but also the first time in the world by a fuel cell vehicle. It was also the very first time that an autonomous vehicle operated on a public highway at 110km/h, which is the maximum speed allowed on the highway by Korean law.

The demonstration took place in Seoul on February 2, with a simple press of two buttons on the steering wheel namely – ‘CRUISE’ and ‘SET’. After which the car switched to self-driving mode and began its 190km long journey to Pyeongchang. During the course of the journey, the vehicle moved and responded to the natural flow of traffic, changed lanes, overtook other vehicles and navigated through toll gates using Hi-pass, South Korea’s wireless expressway payment system.