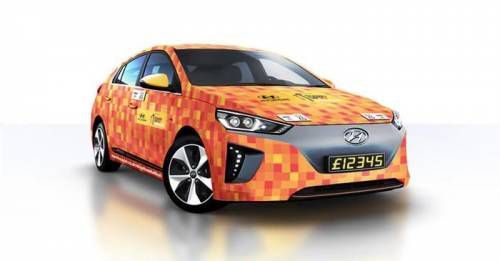 The term 'Contactless Car' might be unfamiliar to many of us, but that's because Korean car maker Hyundai has only just created the world's first Contactless car a few days ago.

So what exactly is it? Hyundai UK has converted an Ioniq electric model into a concept car that has five embedded contactless payment points over it. This is an initiative for charity, and it will allow people to donate money easily.

The Ioniq concept will provide a quick, convenient and unique way for people to 'TAP TO GIVE' in order to make a secure donation to the Stand Up To Cancer foundation. The money raised will be used to fund ‘translational research’, which helps to turn breakthroughs in the lab into revolutionary treatments for cancer.

Each donation of either £5 (Rs 400) or £10 (Rs 800) will trigger the Hyundai Contactless Car to thank people for their generosity with an audio or visual cue, or an electronic movement. The number plates will also become a digital totaliser, which will increase every time someone donates money.

The car will also features an in-car photo booth that will let people instantly print photographs, and then stick them on to the vehicle. Hyundai hopes the car will be covered in a photographic mosaic showing the faces of those who’ve donated.

The Contactless Car will be revealed for the first time at a launch event on 22nd May 2017 inside King’s Cross station, London. Following its launch, it will be driven across the UK appearing at a number of Hyundai and Stand Up To Cancer events between May and November 2017.