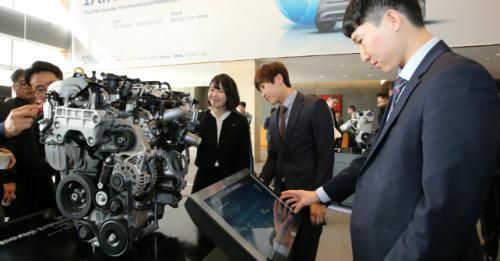 The company revealed plans of 16 new engine and 6 transmission options – expected to make their way into production offerings by 2022.

At the International Powertrain Conference in Seoul, Hyundai revealed the powertrain strategy for all its future models. As part of the plan, the company revealed their new ‘Smart Stream’ powertrain technology that the company claims will suit the taste of enthusiasts but at the same time will meet the strict emission norms. The Korean carmaker says that this new range of engines will not only be ‘smart’ in its design and operation but also boast improved dynamic mobility. In essence, the company aims at optimising the engine by reducing its bulk and weight, in effect improving the efficiency. These new engines are also claimed to be as much as 50 percent better with regards to thermal efficiency.

Hyundai unveiled a new 1.6-litre petrol and diesel motor, that is expected to make its way into all of the Hyundai Group cars including Genesis and Kia. This engine makes use of a Continuously Variable Valve Duration (CVVD) tech which opens and closes the valves based on the inputs from the driver. This is the first time such technology is being commercially applied in mass-market cars. Hyundai also revealed a new eight-speed dual clutch transmission.

Even though plug-in hybrids and electric vehicles are gradually gaining popularity, Hyundai believes that there is still a long way to go before they replace internal combustion engines. And with that in mind, the company plans to introduce 10 new petrol engines, 6 diesel motors and 6 new transmission options. That being said, the Korean carmaker will also be working on electric, fuel cell and plug-in hybrids alongside. The company will channelise its efforts in increasing the range of electric vehicles and developing alternative powertrains.

Meanwhile, work on their hydrogen-powered Fuel Cell Electric Vehicle (FCEV) will continue. The company claims that this new vehicle will have a power output of 160bhp and a driving range of 800 kilometres. All these strategies fall right in line with their plan of introducing 31 eco-friendly models globally in the next three years.