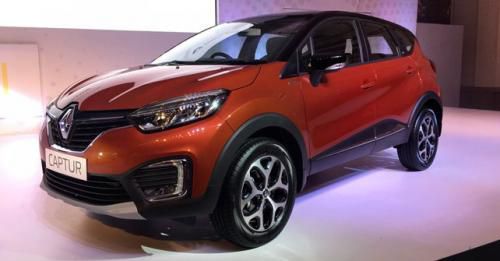 The India-spec Renault Captur will be offered with the same set of 1.5-litre petrol and diesel engines of the Duster. Bookings are now open at Rs 25,000.

You’ve to say that the new Renault Captur looks like a promising proposition for the French automaker. Although we’ve known it for a couple of weeks that its arrival is imminent here, Renault has now dropped the veil on the India-spec version of the compact crossover in the build-up to its launch. In addition to that, bookings are now open for the Captur at Rs 25,000 across Renault dealerships in India. Of course, its prices are not out as yet, but we can still take a quick low-down on what can be expected from the new high-riding Renault.

The Renault Captur that’s coming to India is the one based on the Duster platform and not the one that sells in European markets. That said, visually there’s no telling that this is a different car since the design and styling are almost identical. Dimension wise, though, the India-spec Captur is longer and wider – it’s 4,329mm long and 1,813mm wide. Its height is 1,619mm while the wheelbase is exactly the same as of the Duster at 2,673mm. Ground clearance of 210mm is also identical to that of the Duster.

Where the Captur differentiates itself from its rugged sibling is in the looks and feature department. Compared to the Duster, the Captur will be pitched as a more premium offering. As a result, Renault will be offering the Captur with a raft of premium features and equipment. What’s more, the company has also confirmed that there’ll be various personalization options on the Captur so as to allow the customers to spec-up their vehicle as per their tastes.

Feature-wise, there will be a top-spec ‘Platine’ variant that'll come with LED headlamps with C-shaped DRLs, LED tail lamps, Audi-esque dynamic turn signals, 17-inch diamond cut alloy wheels and a 7-inch touchscreen infotainment system – Apple CarPlay/Android Auto is missing though. The safety net will include ABS and dual airbags as standard fitment across the range.

Renault will be offering the Captur with the same set of 1.5-litre petrol and diesel engines that already do duty in the Duster. The 1.5-litre petrol is rated at 104.5bhp and develops 142Nm, and will come mated to a five-speed manual. Although the Duster is offered with two different states of engine tune of the 1.5-litre unit, the Captur will only get the more powerful 108bhp and 245Nm mill. It will come paired with a six-speed manual. As of now, there won’t be any automatic transmission on offer.

The Renault Captur will mainly compete with the Hyundai Creta. Which means it's expected to carry a price-tag ranging between Rs 10 lakh-Rs 16 lakh (ex-showroom).