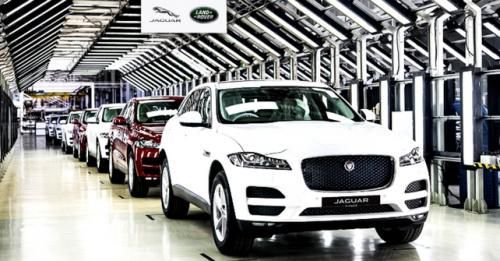 Jaguar Land Rover (JLR) has commenced the local assembly of its F-Pace SUV at its plant in Pune, Maharashtra. With the F-Pace, JLR now has a total of six locally assembled models in India.

Launched in India in 2016, the Jaguar F-Pace was brought via the CBU route, and was offered with a duo of diesel engines - a 2.0-litre inline 4-cylinder, and a 3.0-litre V6. Jaguar has only started the local assembly of the former engine, which produces 177bhp and 430Nm. The motor comes mated to an 8-speed automatic transmission that feeds power to all the four wheels.

Only one variant of the Jaguar F-Pace will be manufactured locally, which is the mid-spec Prestige trim. It comes loaded with features like adaptive LED headlights, rear recline seats, four zone climate control, a 10.2-inch infotainment system with Wi-Fi hotspot and pro services, 380-Watt Meridian sound system configurable interior mood lighting with 10 colours, and activity key, among many others.

On F-Pace’s local assembly, Rohit Suri, Managing Director & President, Jaguar Land Rover India said, “Since its launch in October last year, Jaguar F-Pace has captured hearts and minds of Jaguar fans as well as its distinguished and discerning customers spread across India. The launch of the locally manufactured F-Pace signifies another milestone in our continued commitment and efforts towards ‘Make in India’ policy of the Government of India”.

Before, the F-Pace 2.0-litre Prestige carried a price tag of Rs. 80.29 lakh (ex-showroom, Delhi). However, the price of the very same model after the local assembly has dropped to Rs. 60.02 lakh, making it a very tempting option for potential buyers. After the price-cut, the base Pure trim, which was priced at Rs. 70.66 lakh, has been axed.