Jeep Wrangler pick-up in the works 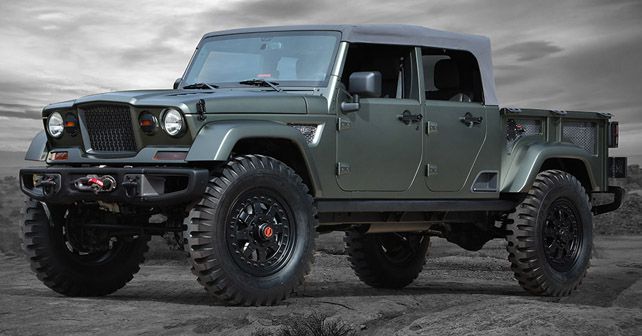 Word is out that Jeep is currently working on a pick-up version of the recently unveiled 2018 Jeep Wrangler. And if rumours are to be believed, the new pick-up will be christened the Scrambler and will come with a soft-top option. Expect it to come out only in late 2018 or early 2019 though.

It’s not the first time that we’re hearing of a Jeep pick-up in development. In the past, a four-door Jeep pick-up prototype has been spied a couple of times. In fact, the picture that you see here is of the Crew Chief 715 concept that was shown in 2016, meaning the American automaker has been thinking about it for a while now. However, since the new Wrangler has just come out, expect the Scrambler pick-up to have a completely new design.

In terms of dimensions, the Jeep Scrambler is going to be longer than the Wrangler it’s based on. Expect the engine options to remain unchanged though – there’ll be a 3.6-litre V6 petrol and a 3.0-litre V6 diesel on offer. The newly announced 2.0-litre petrol motor should also be offered. Jeep's proven Command-Trak and Rock-Trak four-wheel drivetrain will be standard, no doubt.

Although it’s certain that the 2018 Jeep Wrangler will make its way to the Indian market sometime in 2018, the pick-up or the Scrambler is unlikely to be offered in this part of the world.