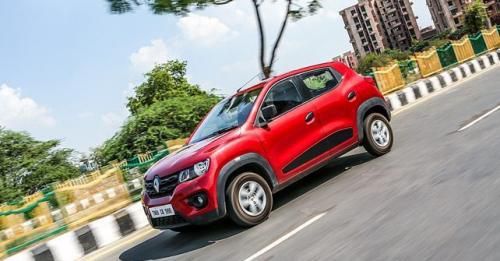 Launched in 2015, the Kwid has set a new sales benchmark for Renault India with over 1.75 lakh units already sold.

The Renault Kwid has managed to cross the 1,75,000 sales mark within two years of its launch. This makes the Kwid the fastest selling car in Renault India’s line-up.

The French carmaker didn’t exactly have a commendable innings in India initially. The brand gained some sales momentum in 2012 when its Duster pioneered a whole new segment of compact SUVs in the country. Successfully understanding India’s bias towards SUV-ish styling, the company launched Kwid in 2015 - which completely shook the sub-compact car market.

Kwid’s quasi-crossover look was a fresh breeze of air into a segment, which until then was only dominated by Alto and Eon. However, Renault didn’t just bank on Kwid’s offbeat looks. The car came equipped with a 7-inch infotainment system in its top-end model - a first for its segment.

With in less than two years of its existence, the Renault Kwid has received an additional (more powerful) engine, an AMT gearbox option, and many exclusive and limited editions - like the Kwid Climber. This way, the French company has made sure that the Kwid remains up to date and doesn’t lose its popularity to the mighty Maruti Suzuki Alto.

The Renault Kwid can be had with either a 0.8-litre or 1.0-litre engine in India. Both the motors are 3-cylinder petrol units. While a 5-speed manual gearbox is standard, the bigger powertrain can also be had with a 5-speed Automated Manual Transmission.