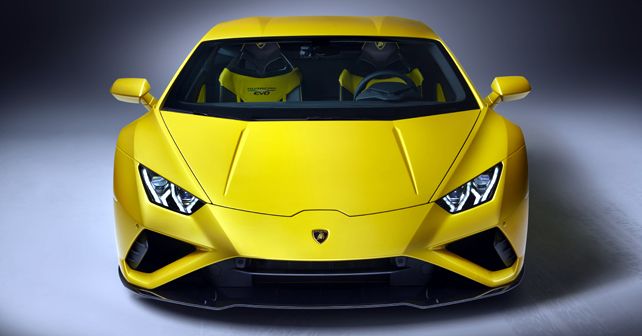 The latest rear-wheel drive weapon from Lamborghini is all-set go on sale in India soon.

It’s not been even a month since its global debut, and Lamborghini has already decided to bring the wrath of their latest rear-wheel-drive weapon to India. Yes, Lamborghini is going to launch the new Huracan Evo RWD in the country on January 29, 2020!

Lamborghini has always been known for building wild cars, but ever since Audi took control of the ‘raging bull’, Lambos started taking the safer and grippier AWD approach. However, from time to time, they were allowed to let loose – like, when the Gallardo LP550-2 Balboni arrived in 2009 or the Huracan LP580-2 from 2015. Now, after a gap of over four years, Lamborghini has once again decided to punish the rear-axle of the baby Lambo by sending all of its V10’s firepower to the rear wheels.

There are a few changes though. First up, the 5.2-litre naturally aspirated V10 motor of standard Huracan Evo has been slightly detuned for the RWD application, and understandably so. Power is down to 602bhp (vs 631bhp in the coupe) while peak torque is 560Nm against 600Nm of the relatively safer all-wheel drive Huracan Evo. Power transmission duties, though, are still carried out by a seven-speed dual-clutch transmission.

The weight is down by 33kg, meaning the RWD derivative weighs 1,389kg. Performance-wise, the grippier AWD version has an edge over the RWD version though. The Huracan Evo RWD takes 3.3 seconds to hit the 100km/h mark from a standstill – which is 0.4s slower than the standard car. Top speed is identical at 325km/h.

For the Huracan Evo RWD, Lamborghini has devised a new traction control as well – instead of the Lamborghini Dinamica Veicolo Integrata (LDVI), which is offered in the standard car, this one features a rather simple sounding ‘Performance Traction Control System (P-TCS). But it obviously has a lot more work to do than its counterpart, since it’s only got two wheels to distribute all that torque.

Among other updates, the RWD version comes with a slightly different front end, featuring a new bumper with reworked air intakes and a different front splitter. The diffuser at the back is also differently-styled.

The price? It’s going to cost you a heck of a lot of money! But just for reference, the Huracan Evo coupe is priced at Rs 3.73 crore in India (ex-showroom). However, because the RWD doesn’t send power on the front axle and it produces around 30 horses less, it’s expected to be cheaper by around Rs 30 lakh – Rs 40 lakh. Cheaper it may be, but expect it offer more thrills for sure!