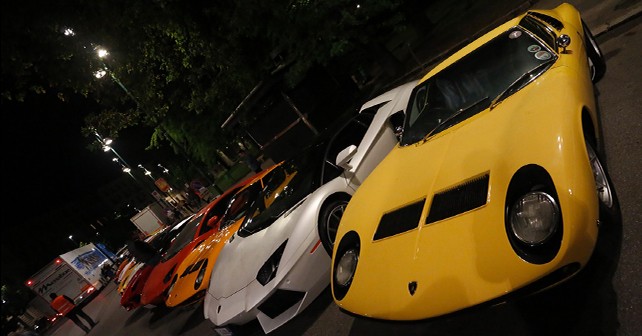 Lamborghini has arranged the biggest reunion of its cars ever to celebrate its 50th anniversary. The tour will start from the house of the Raging Bull, Milan, and will travel through the beautiful landscapes of Lombardia, Toscana, Lazio, Umbria and Emilia Romagna, stopping over in Forte dei Marmi, Grosseto, Roma, San Giustino Valdarno and Bologna. The Lamborghinis will depart again for Sant’Agata Bolognese, for the final celebrations.

This 4 km long and 190,000 bhp convoy includes 350 cars (320 registered participants and approximately 30 courtesy cars for the press and guests). Over 700 participants from 29 different countries have traveled to Italy to celebrate the 50th anniversary of the company based in Emilia Romagna. The youngest driver is 22 years old and hails from Kuwait, while the oldest is 75 and is a French national.

Of course you want to know about the cars so here goes. There are three 350 GTs, five 400 GTs, seventeen Miuras, eight Espadas, two Jaramas, six Urracos, 15 Countachs, one LM 002, 21 Diablos and 36 Murcielagos. Don’t forget to add 123 Gallardo’s to that tally.

Stephan Winkelmann, President and CEO of Automobili Lamborghini said that, "The 50th Anniversary Grand Tour, with more than 700 participants representing 29 countries, is evidence of the global dimension our brand enjoys today, and the strength of the Lamborghini myth that continues to grow.”