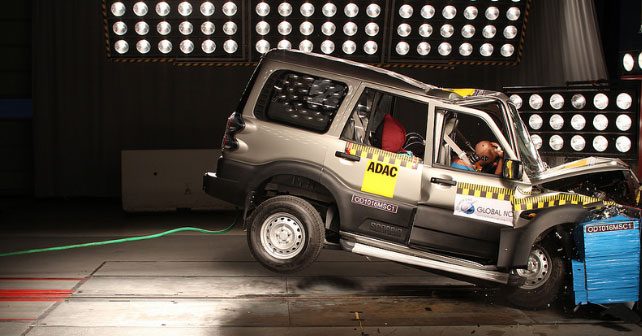 Things didn’t go very well for Indian cars when they were subjected to the first ever Global NCAP crash tests in 2014. Out of the eight cars tested, only the Polo and Etios also equipped with dual front airbags scored respectable four-star safety ratings while the other six cars failed the tests with zero stars.

Now two years later, not much has changed as the Global NCAP recently subjected five-passenger cars to the tests again and all of them scored a grand total of zero stars. Among the cars tested were non-airbag-equipped versions of the Maruti Suzuki Eeco, Maruti Suzuki Celerio, Hyundai Eon, Mahindra Scorpio, and Renault Kwid while a driver airbag-equipped version of the Kwid was also tested.

All crash tests were conducted in a lab for frontal-offset impact crashes at a speed of 64 km/h. 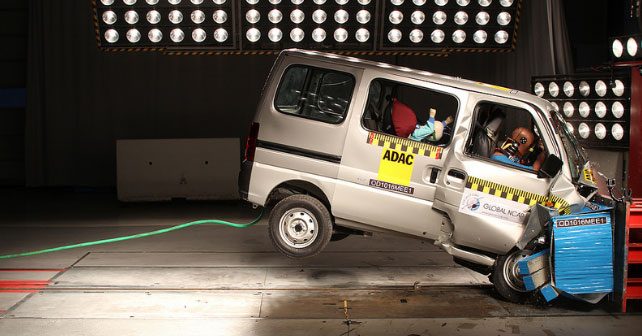 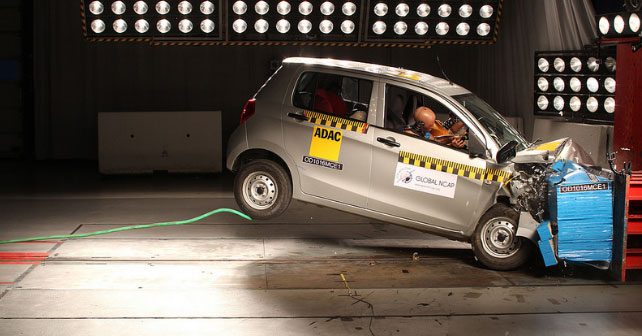 The Maruti Suzuki Celerio B-segment hatchback without airbags also scored zero stars for adult occupant protection and one star for child occupant protection not just because of the lack of airbags but also for the front of the passenger cabin caving in to an extent. The vulnerability of a three year old child in the event of a crash resulted in a one star safety rating for children. 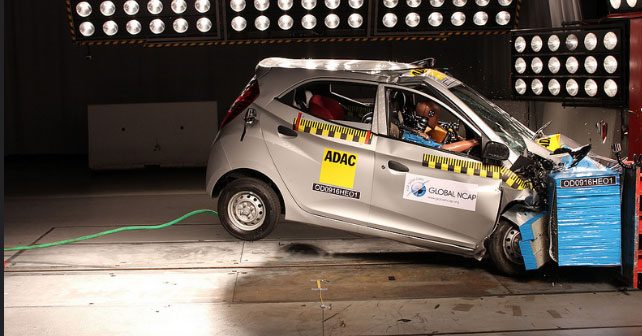 An unstable structure giving way during an accident led the Hyundai Eon scoring a zero star safety rating for front occupants, also contributing to the factor was the lack of front airbags. The car scored a two star rating for child occupant protection.

Mahindra’s popular Scorpio SUV also scored a zero star Global NCAP safety rating owing to the collapse of the front structure and the lack of front airbags, leaving occupants with a high chance of life threatening injuries for atleast one of the front occupants. The SUV scored a two star safety rating for child occupant protection. 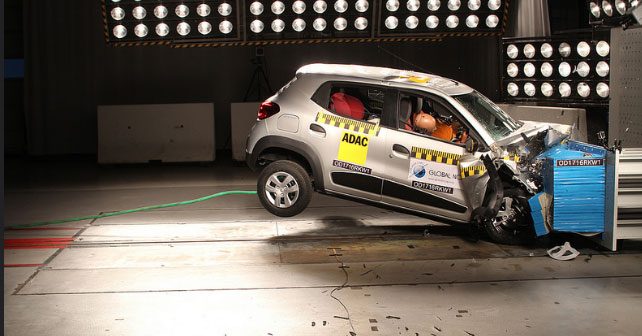 The Renault Kwid without airbags scored zero stars following which Renault sent in a reinforced Kwid for crash tests, one with a driver airbag and one without a driver airbag. Both cars scored zero stars in adult occupant protection. The structure did not collapse like earlier but was still regarded unstable. Following inspection, the reinforcements were found to be made only for the driver’s side. A high compression in the chest area for the airbag equipped model results in its zero star rating. The car scored two stars for child occupant protection.

Commenting on the latest crash test results, David Ward, Secretary General of Global NCAP said,“The latest SaferCarsforIndia results show how important it is for cars to have a body shell that can remain stable in a crash. This is an absolutely crucial pre-requisite for occupant safety together with fitment at least of front airbags. It is very surprising that a manufacturer like Renault introduced the Kwid initially lacking this essential feature. Global NCAP strongly believes that no manufacturer anywhere in the world should be developing new models that are so clearly sub-standard. Carmakers must ensure that their new models pass the UN’s minimum crash test regulations, and support the use of an airbag.

“We welcome Renault’s efforts to correct this and we look forward to testing another improved version with airbags. Renault has a strong record of achievement in safety in Europe and it should offer the same commitment to its customers in India.”

India is working towards setting up its own crash norms from October of 2017 with the introduction of the Bharat New Car Assessment Programme that will test all new cars for the market.