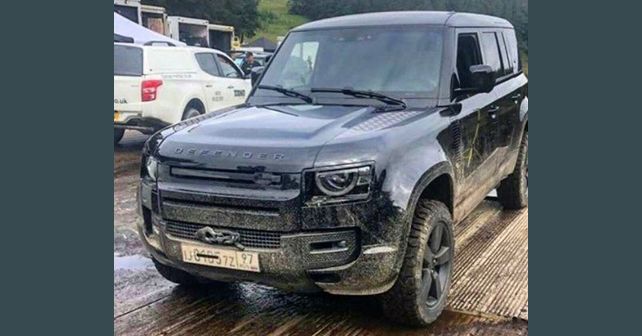 In July 2019, a Land Rover enthusiasts forum had managed to get hold of the upcoming 2020 Land Rover Defender's specification, powertrain & body style details. Now though, an Instagram user has caught the car undisguised, for the first time, on the sets of the upcoming James Bond movie, No Time To Die. The model seen here could be the Defender 110. For those not aware, the 2020 Defender will arrive in three body styles, which have been code-named 90 (Short Wheelbase), 110 (Mid-size) & 130 (Long Wheelbase). Out of the three, the 110 will be the first version to debut in October 2019. It will be available with a 5, 6 or 7-seat configuration.

While we can only see the front & some bit of the car's side profile in the shot, it is still good enough to give us some important updates on the new car's design. As shown by the camouflaged test prototypes, the 2020 Defender will retain the signature boxy silhouette of its predecessors. However, the styling & design elements have definitely been upgraded to keep up with the brand's modern design philosophy.

First up, the square headlight clusters with a semi-circular LED setup reminds us of the Discovery Sport's headlight design a bit. This, coupled with the flared wheel arches, gives the 2020 Defender a really imposing stance. The hood, which remains rather flat, is accentuated by the chequered plates. Further, the traditional Alpine windows too seem to have been retained. While the extraordinarily large gap between the wheel & the arches suggests the suspension set up has been tinkered with, expect the standard car to feature good ground clearance none the less.

Now that we know what the car is going to look like (more or less), we're eager to find out if at all Land Rover will bring this off-road legend to the Indian market.