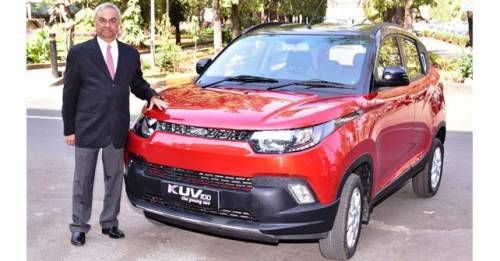 Mahindra is celebrating the first anniversary of its KUV100 compact crossover with the launch of an anniversary edition model featuring cosmetic enhancements and bigger wheels. Made available only in the top-spec K8 variant of the KUV100, the celebratory special edition model can only be had in either Flamboyant Red or Dazzling Silver shades featuring a contrast metallic black roof paint scheme.  Adding to the party will be the new larger 15 inch alloy wheels. In addition, the mid-spec K6 and K6+ variants are now being made available with the standard 14inch alloys.

Mahindra claims to offer a more premium feel to the interiors of the KUV100 special edition with a black interior colour theme.

Speaking on the introduction of the fashionable new look KUV100, Pravin Shah, President & Chief Executive (Automotive), M&M., said, “On the first anniversary of KUV100, we would like to thank our customers for their support in creating a new SUV segment. The KUV100 has the appeal of an SUV and the practicality of a compact car, making it a compelling value proposition. At Mahindra, we constantly update our products in keeping with the latest trends. We have introduced the new avatar of the KUV100 with dual tone exterior colour, sporty and premium black interiors and bigger dynamic design alloys wheels along with various accessory kits. We are confident that it will further build on the KUV100’s style quotient and make it a popular choice amongst the youth.”

The Mahindra KUV100 is priced between Rs. 4.58 lakh to Rs. 7.21 lakh (ex-showroom Delhi). The anniversary edition commands an additional Rs. 13,000 over the standard K8 variant.