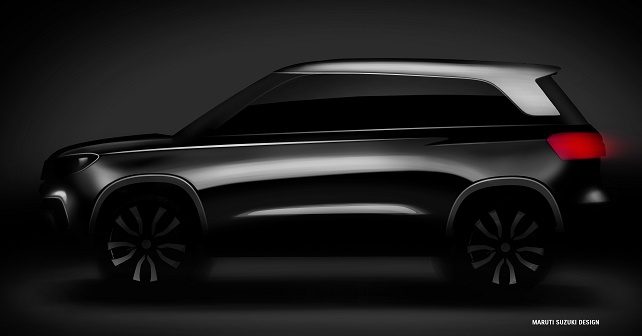 Maruti Suzuki has christened its upcoming compact SUV as ‘Vitara Brezza’ as it prepares to take on the Renault Duster, Hyundai Creta and the Ford EcoSport.

Expected to measure under four metres in length, the Vitara Brezza will make its global debut at the Auto Expo next month.

It is likely to be powered by the country’s favorite 1.3-litre MultiJet turbo diesel engine as well as the 1.2-litre K-Series petrol engine that does duty in other models such as the Swift. Ciaz’s 1.4-litre engine might also finds it way under the hood of the Vitara Brezza.

The sketch reveals little about Maruti’s upcoming offering, while quotes from its unnamed designed also give an unclear picture.

“Balanced proportion supported by square wheel arches, short overhangs, high ground clearance and upright hood gives the vehicle a confident stance. The raising belt and rocker lines, and the roofline that slopes down gently towards the rear give the vehicle a dynamic posture.”

“The body surfaces are natural and sculpted tastefully to create the right interplay of highlight and shadow. Instantly recognizable floating roof over the wraparound greenhouse adds to the visual drama, and makes the Brezza standout in the crowd,’’ the designed said.

‘Brezza’ literally means fresh breeze in Italian. Considering Maruti’s previous struggles to establish a foothold in the ever-growing SUV segment, the company would be hoping that this cars marks a turnaround in their fortunes.

More details of the Vitara Brezza are expected to be revealed in the run-up to the Auto Expo. Maruti has promised to launch the car a few weeks after the bi-annual motor show.