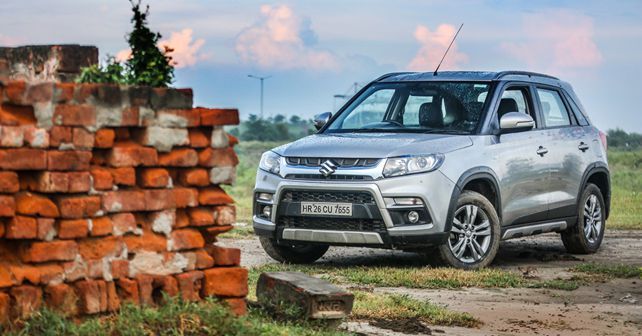 Maruti Suzuki is to lock horns with the recently launched Tata Nexon AMT diesel with its Vitara Brezza AMT.

A copy of a leaked document has been doing the rounds online, concerning the AMT version of the country’s favourite compact SUV. It’s been known for a while that Maruti Suzuki has been developing an AMT automatic version of its Vitara Brezza. About two days ago, images of the Vitara Brezza in two different shades, a metallic deep orange and a maroon coloured, and complete with blacked-out version of the alloy wheels that it’s currently offered with, were doing the rounds.

Different reports for the same have popped up online stating that the updated version will continue to remain the same as the current car, apart from the incorporation of ABS and dual front airbags as part of standard equipment. As a result, the optional LDi (O) and VDi (O) variants will be done away with, as their sole purpose was to offer ABS and front airbags in the lower variants that did not offer the same.

Along with these reported updates, now comes yet another report about the Vitara Brezza being ready to broaden its appeal with the option of an AMT automatic transmission in select variants.

This will definitely give a new impetus to the Vitara Brezza’s sales, not that the manual-only Brezza’s sales needed one. But still, given the launch of the Tata Nexon AMT, which was making news, the Brezza could definitely do better with the option of an AMT.

It was natural for Maruti Suzuki to react in time, for technically, they have had the powertrain ready since the times of the previous-generation Maruti Suzuki DZire diesel which in its last year gained an AMT autobox. The new Dzire, Swift and Ignis diesel run the same setup as well for the 1.3 litre diesel AMT versions. However, the Vitara Brezza uses a more powerful 89bhp version of the 1.3 litre diesel engine shared by its smaller siblings. So, this is going to be the first time that there will be an AMT automatic version from Maruti with the 89bhp.

Looking ahead, an updated version of the Maruti Suzuki Ciaz is due for launch later this year. And you can expect Maruti to launch a diesel AMT version of the mid-size as well, since it has an identical diesel powertrain specification as the Brezza diesel.