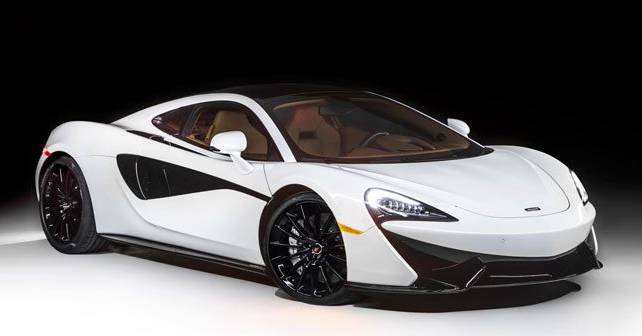 The new McLaren 570GT by MSO gets a new exhaust system and styling enhancements.

McLaren has officially released details of the new 570GT by MSO ahead of its official debut at the Pebble Beach Concours d’Elegance. Notably McLaren’s bespoke division – MSO made its debut at the 2012 Pebble Beach Concours d’Elegance. The new McLaren 570GT by MSO is subject to styling, feature and mechanical enhancements. Like the standard GT model, the 570GT by MSO features a 15 per cent softer suspension setup at the front and 10 per cent at the back in order to make the ride more comfortable. Also, the electro hydraulic steering system with 2 per cent reduced ratio for smoother response in tune to make long distance drives more comfortable.

You can tell the 570GT by MSO apart from standard models from its new electro-chromic roof that can be adjusted through five defined points from almost clear to a rich, dark tint to reduce the impact of the Californian summer on its occupants states the company. The car comes finished in a Pearl White paint shade complimented by an MSO Piano Black package which adds deep gloss black finish to exterior details including the wheels, side skirt, front and rear and on door inserts, as well as on some interior details. The interior gets a ‘Saddle Tan’ shade and the car comes with a  12-speaker Bowers and Wilkins Hi-Fi system.

The car is also fitted with a new MSO Exhaust system made out of Titanium. As a result the exhaust system is 30 per cent lighter than the stainless steel system. The new exhaust is developed to deliver a richer and more progressive exhaust note in a quicker manner.

The McLaren 570GT by MSO by the company’s M838TE 3.8 litre, twin turbocharged V8 engine developing 562BHP of max power and 600Nm of peak torque, sending power to the rear wheels via a seven-speed automatic gearbox.  The car is capable of going from 0 – 100 km/h in 3.4 seconds and onwards to a top speed of 328 km/h.

Paul Mackenzie, Executive Director of McLaren Special Operations, commented: ‘This is the second consecutive year that McLaren Special Operations has used the Pebble Beach Concours d’Elegance to demonstrate our capabilities on Sports Series cars. Last year, soon after the launch of the 570S, we showed the 570S ‘by MSO’ which featured the uniquely formulated Mauvine Blue paint finish coupled with a bespoke interior finished in Carbon Black leather with coordinating detailing, carried through from the exterior color. This year, closely following the reveal of the GT addition to the Sports Series family, we showcase the breadth of McLaren Special Operations personalization work, this time focusing on bespoke engineering design and components. With its Electro Chromic Roof especially, the McLaren 570GT by MSO Concept would be well suited to the needs and demands of customers in sunnier and warmer climates.’