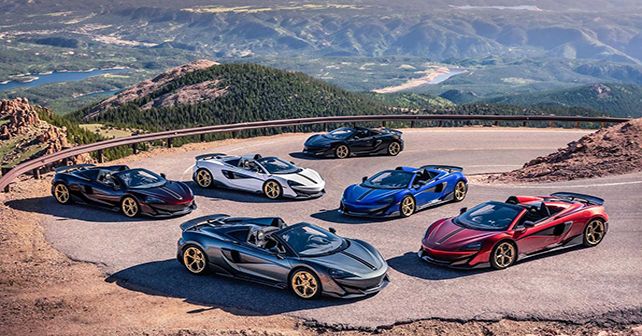 To celebrate the famous Pikes Peak hillclimb event, McLaren has revealed six special edition variants of the 600LT Spider. Highlights include golden accents all around and racing bits from the McLaren Senna.

Each of the Pikes Peak Collection 600LT is fitted with the MSO Club Sport Pack that features carbon exterior pieces, titanium wheel bolts and lightweight racing seats – all of which are lifted directly from the McLaren Senna. All six cars come in different colours, namely - Black Gold, White Gold, Nerello Red, Volcano Red, Aurora Blue and Midas Grey. In addition to that, each car features a gold and matte black stripe as well as ‘Satin Speedline’ gold wheels.

Inside, you’ll find special Pikes Peak logos embroidered into the headrests, while there’s even more gold treatment in the cabin. This includes a Satin Gold band on the steering wheel as well as on extended paddle shifters. Each car also gets a ‘dedication plaque’ mentioning ‘Pikes Peak Collection 1 of 6’.

There are no revisions on the mechanical front, and that’s no bad news. The special edition units will come powered by the same 3.8-litre twin-turbo V8 that powers the standard version. Power output is 592bhp along with 620Nm of torque. Power transmission duties are carried out by a seven-speed dual-clutch transmission, which sends the drive to the rear wheels.