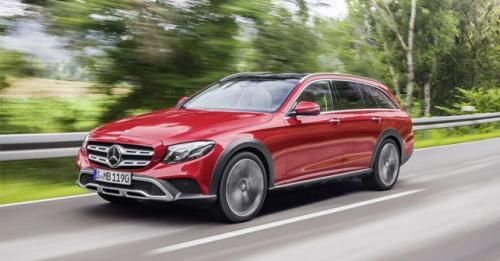 Jacked up Mercedes-Benz E-Class estate to be showcased at the upcoming Delhi Auto Expo, followed by the market launch later in 2018.

With the 2018 Delhi Auto Expo just around the corner, Mercedes-Benz India has revealed the names of its new car models that’ll be showcased at the motor show. Hitting the headlines at the Mercedes stand will be the S650 Maybach, EQ electric concept SUV and the E-Class All-Terrain, and it's the last one that interests us a wee bit more, since it’ll be launched in the country later in 2018.

For the uninitiated, the E-Class All-Terrain is a jacked up estate car that’s based on the E-Class sedan. Of course, estate cars aren’t all that famous in India as, say, they're in Europe, but then our market has seen a couple of entries in this segment in the past few years. First, it was the bonkers Audi RS6 and then, more recently, the Volvo V90 CC. That said, when Mercedes will launch the E-Class All-Terrain in India, it’ll compete only with the Volvo since the Audi is a high-performance niche product as compared to the other two.

Highlights of the E-Class All-Terrain include an estate body with extra ride height, body cladding all around, bigger wheels and AWD. Air suspension will be a standard fit as well. Mercedes hasn’t divulged any details about the E-Class All-Terrain’s powertrain in India, but expect it to borrow the E-Class sedan's 3.0-litre V6 diesel unit mated to a 9-speed automatic transmission.

Expect the Mercedes-Benz E-Class All-Terrain to carry a price tag of around Rs. 65 lakh–Rs 70 lakh at the time of the launch. As mentioned earlier, it doesn’t have many rivals except the Volvo V90 CC.