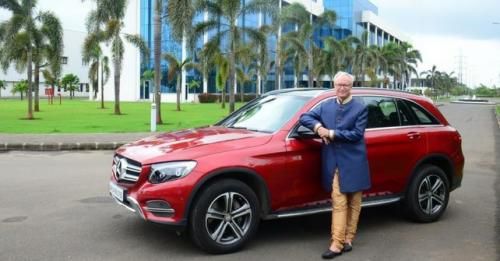 The Celebration Edition can be had in both GLC 220d and GLC 300 models.

Like most limited edition models, the GLC Celebration Edition only gets subtle visual enhancements and some extra kit over the standard versions of the GLC. With the special addition, the German automaker has also introduced a new exterior shade called ‘Designo Hyacinth Red’.

Additional kit offered on the GLC Celebration Edition includes use of extra chrome on the front and the rear, ORVMs painted in glossy black, satellite navigation system powered by Garmin, sports pedals, and LED logo projector - which shadows the Mercedes insignia when doors are opened.

Mechanically, the GLC Celebration Edition remains exactly identical to the standard GLC - which means that the SUV can be had with either a 2.0-litre turbo-petrol motor capable of producing 245bhp and 370Nm, or a 2.1-litre diesel which makes 170bhp and 400Nm. Irrespective of the engine choice, a torque convertor 9-speed auto gearbox sends power to the GLC’s rear wheels.

The GLC Celebration Edition diesel is priced at Rs. 50.86 lakh, while the petrol model can be had for Rs. 51.25 lakh, both ex-showroom, pan-India.