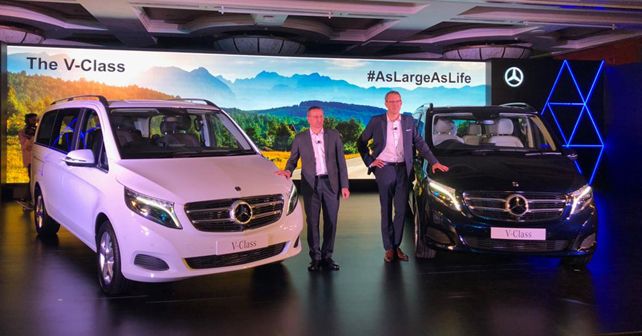 Mercedes-Benz has kicked off 2019 by making a return to the luxury MPV segment in India with the launch of the V-Class people carrier. Produced at Merc's Vitoria plant in Spain and imported to India as a CBU, the V-Class has been priced at ₹ 68.4 lakh (ex-showroom). However, at this stage, the Stuttgart-based firm is yet to confirm plans about the local assembly of the V-Class. The V-Class marks Mercedes-Benz's second attempt at entering the luxury MPV market in India – the first attempt was the launch the R-Class in 2011. The R-Class, due to low demand, failed to fetch good sales and, consequently, was discontinued soon.

While the V-Class is offered in three variants in the international markets, in India, it goes on sale with a two-variant lineup – the V 220d 'Exclusive' and the V 220d 'Expression'. While the 'Exclusive' variant is a 6-seater Long Wheelbase version (LW), the 'Expression' variant has been launched as a 7-seater Extra Long Wheelbase (ELW) version. The ELW version measures 5,370mm in length (230mm more than the LW version) and has a 3,430mm wheelbase. One of the key factors that make the 6-seater version more expensive than its Extra Long Wheelbase counterpart is its unique middle row arrangement. The two armchair-style individual seats, which make up the middle row, have been bolted on swivel mounts that allow them to be turned and face the third row. However, both variants feature a sliding door for rear seat access, much like the Kia Carnival.

Providing firepower to the V-Class is a BS-VI compliant 2,143cc diesel motor, which pumps out 161bhp and 380Nm of torque. The power is sent to the rear wheels via a 7G-Tronic automatic gearbox. While the motor belongs to Mercedes' older OM651 family of engines (as compared to the new-spec OM654 engine series), it can still propel the V-Class from 0 to 100km/h in a matter of 10.9 seconds, and thanks to a hardware upgrade, the motor is now BS-VI compliant.