With the latest version of Mercedes' small sedan - the Mercedes C class - getting rave reviews the world over, the company today launched the diesel version of the car in India. While the C 200 petrol model has been available in the market for a while now, the C 220 diesel version has been highly anticipated by customers - given the propensity of Indian consumers to prefer diesel engines in their luxury vehicles.

Powered by a 2.2-litre turbo diesel engine, the C 220 has a power output of 168bhp, and produces 400Nm of torque. This enables the C 220 to accelerate from 0-100 in just 7.4 seconds, while it tops out at 233km/h. The power is transferred to the rear wheel via a 7-speed automatic transmission. According to the manufacturer, the C 220 is the most fuel efficient car in its segment with a claimed efficiency figure of 19.27km/l. 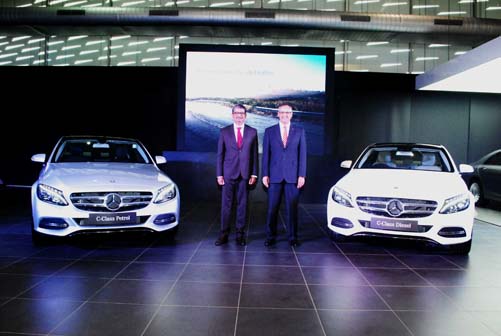 Safety wise the C 220 is equipped with a bevy of protective features which include 7 airbags as standard, along with Attention Assist, Pre Safe, Tyre pressure monitoring system and more. The interiors have also received an upgrade, featuring a Garmin navigation system as standard, as well as a Panoramic sunroof. It also features LED headlights as standard, and 5 selectable driving modes to enhance the driving experience.

Available only as a CBU, while the C 200 petrol version is now assembled in India, the C 220 is available in two versions - Style and Avantgarde - and is priced at 39.90 lakhs and 42.90 lakhs respectively (ex-showroom, Delhi).