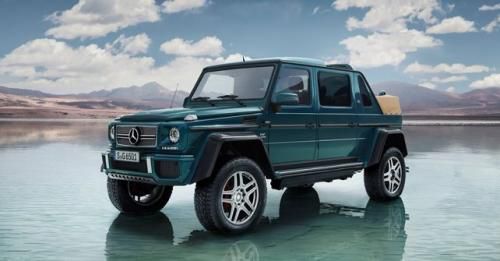 Mercedes-Benz G-Wagen gets part Maybach, part AMG treatment in its latest avatar. Only 99 units will be made.

Before we get on with the details of the wild G650 Landaulet, there’re a few things that you must know. The G-Class, or G-Wagen, has been in production since 1979, and the firm has just kept reinventing the G-Wagen over all these years. Now, though, Mercedes reportedly wants to relieve the G-Class of its duties. And, so, this – the G650 Landaulet – could well be the final send-off special for the iconic off-roader.

Here’re the main highlights of the G650 Landaulet. First, the name Landaulet refers to a vehicle that comes with a retractable roof that folds over the rear seats. The retractable roof is electrically operated but it’s an exclusive feature for rear seat occupants – the front passengers get a hard top. There’s more stuff to keep rear seat passengers entertained. The seats for examples are individually adjustable and have a massaging function, calf rests and thermal cup-holders. There are two 10-inch rear entertainment screens for each passenger at the back, too.

Front seat passengers need not worry, though - especially if you happen to be the driver. That’s because there's a madly powerful 6.0-litre twin-turbo V12 lurking under that high-rising bonnet. The engine produces 621bhp of peak horsepower along with a mind-boggling torque of 1,000Nm. Power is sent to all four wheels, of course.

Among other mad bits and bobs on the car, the G650 rides on 22-inch wheels that come shod with 325/55 section tyres, and has portal axles like the G63 6x6 AMG. The ground clearance is 450mm. It also has 100 per cent differential locks and a low-ratio gearbox. All and all, it still is a true blue off-roader.

Mercedes hasn’t revealed the price of the G650 Landaulet as yet. But, given the fact that only 99 units will be made, it’s only logical to expect it to have a price tag that'll match its heft. The G650 Landaulet will debut at the upcoming 2017 Geneva Motor Show in March.