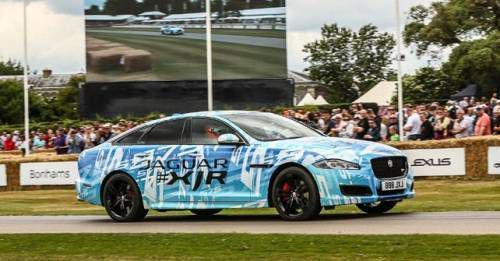 Jaguar is going to give the F-Type SVR's 567bhp V8 powerplant to the XJR saloon.

It seems Jaguar’s engineering department has found a new way to get their kicks these days. You see, in the last couple of days, the firm has been quite busy adding more and more horsepower to its cars. It started off with the more powerful versions of the XE, XF and F-Pace, followed by the arrival of the utterly bonkers XE SV Project 8 at the 2017 Goodwood Festival of Speed. And next up on that list is an updated version of the Jaguar XJR. What does it bring to the table? More firepower, what else!

The updated Jaguar XJR made its first public appearance at the Goodwood Festival of Speed alongside the XE SV Project 8. However, while the Project 8 got all the limelight, the refreshed XJR was properly disguised. Jaguar wasn’t too keen on sharing anything about the new car either, but the ’575’ monikers slapped all over the bodywork tell you half the story.

The updated XJR is expected to share its powertrain with the F-Type SVR. As a result, the maximum power output of the XJR’s 5.0-litre supercharged V8 motor will go up from 542bhp to 567bhp (or 575PS as the stickers suggest). Torque figure should also touch the magical 700Nm mark – 20Nm more than the current model. Power transmission duties will be carried out by an eight-speed automatic gearbox. Expect the additional horses to shave a couple tenths from the current car’s 0-100km/h time of 4.5 seconds. Top speed should be more or less unchanged at around 280km/h. Minor suspension tweaks are expected as well. The cabin should also receive some sporty bits and bobs.

Jaguar is expected to unveil the most powerful version of the XJR saloon in a couple of weeks. This might also be the last update for this generation of XJR since the next-gen XJ is currently in the works. The all-new Jaguar XJ is expected to make its debut sometime in 2018.