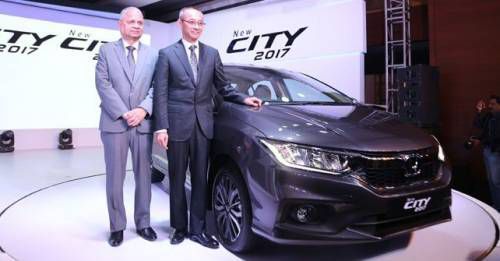 The mid-size sedan is all set to get a major rejig this year as Hyundai will launch its all-new Verna, Maruti will give its Ciaz a mild update with ISOFIX seat compatibility and here comes Honda’s launch of the updated City that now looks more contemporary and comes with even more equipment.

This updated 2017 Honda City for India gets a revised front end with a new bumper bearing sharper design lines, the lower section is now finished in black plastic. The grille now thankfully comes with a little less chrome as the mesh gets more space. But the more important change upfront are the new full LED head lamps featuring daytime running LED strips. While visibility at night was not a problem with the earlier model this update is surely appreciated in way of providing better illumination at night. The new LED fog lamps will come in handy on this regard as well. That’s not the end of the LED treatment for the car though for it also gets LED tail lamps. The new LED lights make the Honda City the first car in the segment to get the same.

Change is evident in the side profile of the updated Honda City from those bigger 16 inch diamond cut alloy wheels in the VX variant onwards while some variants get 15 inch diamond cut wheels. At the rear, apart from the new tail lamps there is a new boot lip spoiler with an integrated stop lamp in the top-of-the-line ZX variant.

On the inside, the new Honda City gets an updated dashboard with a new 7-inch touchscreen infotainment system featuring mirror link connectivity for smart phones to give it Wi-Fi connectivity for a whole range of functions including browsing your e-mail to satellite navigation, it also has 1.5 GB of internal storage space and more. Other new features include automatic head lamps and wipers, auto dimming IRVM, adjustable rear head rests, tilt and telescopically adjustable steering wheel, etc. The City now also gets one-touch operation for its sunroof. Lastly, while front airbags were standard on the outgoing model the new one gets six-airbags on the ZX variant. Rear defogger is now standard across variants as well,

Mechanically the new City remains the same as the previous model with the choice of 1.5 litre, four cylinder petrol and diesel engines. The diesel is only available with a six-speed manual gearbox while the petrol gets a choice of a five-speed manual and CVT automatic gearbox. Fuel efficiency figures have fallen marginally for the diesel and manual petrol versions. The diesel now returns an ARAI claimed 25.6 km/l while petrol manual has a claimed figure of 17.4 km/l. The automatic model’s efficiency remains the same as earlier at 18 km/l.