New Audi A8 to get 3D surround sound for rear passengers 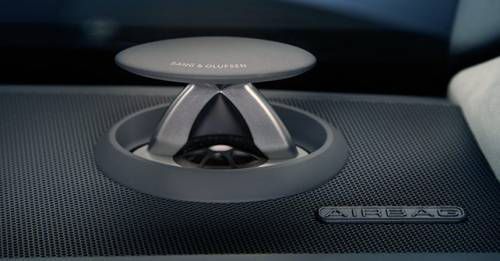 The fourth generation Audi A8 will, for the first time, offer 3D surround sound for the rear passengers.

Aided by a total of 23 high-quality loud speakers, the new Audi A8 will allow for a better sound experience for all passengers in the four-door luxury saloon. The technology has been developed by Audi and Bang & Olufsen with close cooperation with Fraunhofer Institute in Germany. 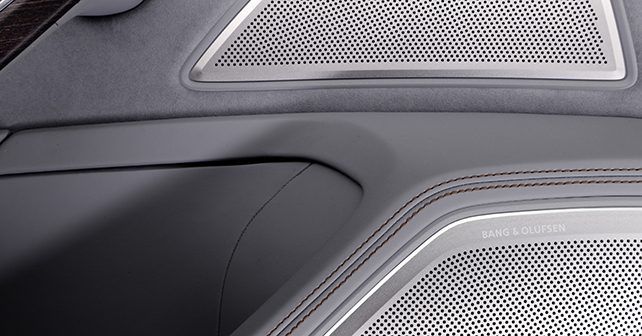 The 3D surround sound technology was first offered in the Audi Q7 back in 2015, only for the front passengers. The technology has now been advanced to provide the same experience for the rear passengers in the new A8. The speakers use extremely powerful low-distortion Neodymium magnets which are laid out in strategic places in the car to provide the optimum audio experience.

For the 3D surround technology, two loud speakers are placed on the A pillars and two are places on the headliner above the passenger rear seats. These provide a spatial dimension of height. The system uses a 1,920watt amplifier from Bang & Olufsen and uses an algorithm that Audi has developed with Fraunhofer Institute. The algorithm uses stereo or 5.1 recordings to calculate the information for the third dimension and processes it for the four 3D loudspeakers. Meaning that it adapts individually to the recording to avoid causing any distortion to the sound. 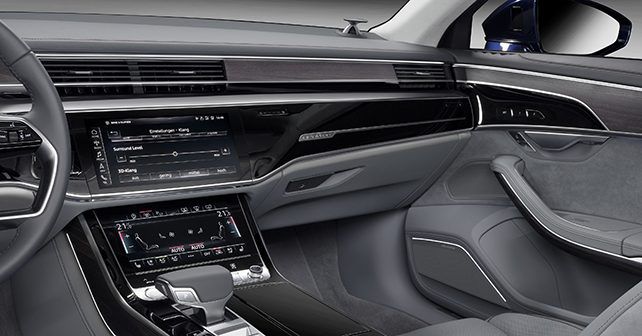 “Integrating the loudspeakers at the right points in the car is the key to 80 percent of the audio quality,” explains Wolfram Jähn, sound/acoustics developer for the A8. “They need to be mounted as rigidly as possible, so we fixed the subwoofer in the rear panel, which is made from carbon fiber-reinforced polymer. The aim is to isolate the loudspeaker from the body and prevent any vibrations from being transmitted.”

The speaker grilles also play a key role as they have to be able to protect the speakers, while also provide the best acoustic transparency. Audi’s sound engineers and designers worked closely with the team at Bang & Olufsen to find the right balance between open and closed surfaces. The new A8 uses precision-perforated covers of double-anodized aluminium on the loud speakers while the Woofers will have LED lights to emphasise their presence as well.