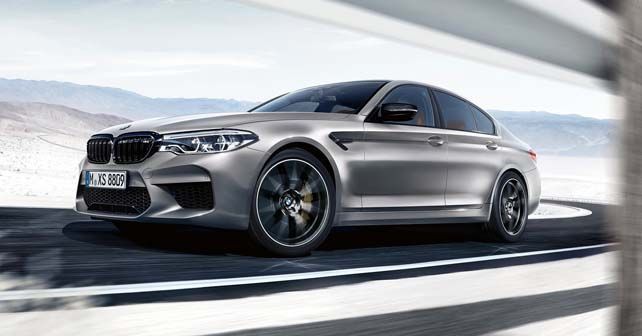 More firepower and a stiffer chassis make the BMW M5 even more hardcore!

If you thought the new BMW M5 with 600 horses was a bit too much, then here’s something that makes it look even more ridiculous. The engineers at BMW M GmbH have decided to give the regular M5 a ‘Competition’ package, and it simply means that there’s a stiffened chassis and more firepower on offer now!

The highlight here is still the stellar 4.4-litre, twin-turbo V8 from the standard model, but it now generates 25bhp more than the standard model. As a result, the peak power output stands at 617bhp at 6,000 rpm. Torque is unchanged at 750Nm, but BMW claims that it stays put for longer now, 1,800 to 5,800 rpm – a 200rpm wider band than the standard version. The V8 motor comes mated to the same 8-speed automatic gearbox that channels power to all four wheels.

Thanks to the added horsepower, the M5 Competition Pack will sprint to 100km/h from a standstill in 3.3 seconds – which is a tenth quicker than the regular model. Pin the throttle for longer, and you’ll see the gap widen a bit – a sprint from 0 to 200km/h takes 10.8 seconds, which is 0.3s quicker than the standard M5.

Among other mechanical updates are a few chassis tweaks, including a stiffer spring rate, extra camber at the front axle, a stiffer anti-roll bar at the rear and stiffer mounts. The ride height has dropped by 7mm.

To help onlookers distinguish it from the standard model, the M5 Competition comes with blacked-out treatment on the front grille, mirror casings, boot lip spoiler, diffuser insert and tailpipes. It also comes with a new Y-shaped, 20-inch, forged lightweight alloy wheels. Inside, it looks almost identical to the regular M5, but as soon as you turn the ignition on, a ‘M Competition’ graphic appears on the instrument cluster to let you know that you’ve the most powerful production spec M5, ever!

You’re unlikely to see the BMW M5 Competition make it to our shores. That said, if you’re looking to buy a super-fast saloon, the standard M5 will do just fine – it’s already on sale in India and is priced at ₹1.43 crore (ex-showroom). Alternatively, Mercedes-AMG has also launched the E63 S in India, which is as mental and as expensive (₹1.5 crore, ex-showroom) as the BMW M5.