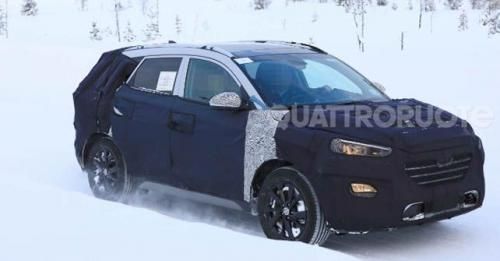 An updated Hyundai Tucson has been spotted testing in Scandinavia prior to its debut.

Draped in heavy camouflage, a Hyundai test mule, still under development, has been spotted by our Italian partner Quattroruote during the Scandinavian winter. The vehicle spotted was the new Hyundai Tucson, which is expected to receive an update in styling prior to its debut next year.

Hyundai will showcase the all-new Santa Fe at the Geneva Motor Show, which has been given a complete styling overhaul. However, Hyundai’s mid-size SUV, as it’s not a completely new-generation model of the car, will only receive styling updates as well as new features when it is revealed. The front headlamps will remain in their current position, while the grille and the rest of the bumper may be tweaked. Additionally, the tail lamps will also be redesigned. The Tucson’s interior will get a new layout as the infotainment screen spotted in the test mule is separated from the dashboard itself to give a floating style look to the screen.

As for powertrains, there may be subtle changes to improve the currently available options, however, there is no indication of electrification. After the Tucson facelift has been revealed internationally, Hyundai is likely to launch the new model soon after in the Indian market as well.